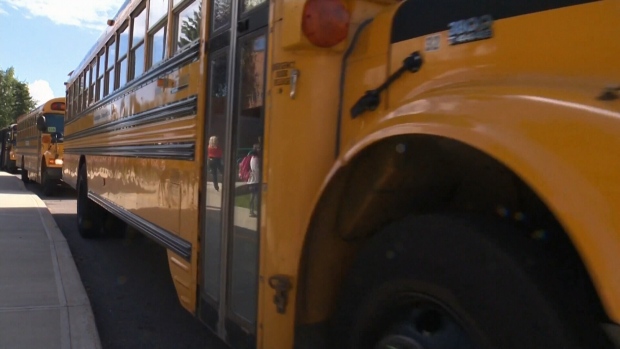 WINNIPEG — The Canadian Union of Public Employees (CUPE) is calling on all school divisions to cancel any school bus routes.

This announcement comes after the Louis Riel School Division implemented new protocols, in which bus drivers have to make eye contact with children to check and see if they are exhibiting any cold or flu symptoms, and allow sick kids on the bus who don’t have an adult to take them home.

“Considering the health authorities’ suggestion of social distancing, we’re not convinced that is possible on a school bus,” he said.

CUPE noted that bus drivers aren’t equipped to give accurate medical assessments, and don’t have the proper health and safety tools to do their job on an enclosed bus with students who have COVID-19 symptoms. It also said drivers who do identify students with cold or flu symptoms don’t have the necessary tools to make sure the kid follows social distancing protocols.

“Bus drivers should be focused on the road, not on enforcing a quarantine at the back of their bus,” said Peschel.

“For the safety of the students and staff, CUPE is calling for the cancelation of school bus routes going forward, asking parents to assess their children who may have flu-like symptoms by calling Health Links, and arranging alternate transportation.”

CUPE also said it supports the call for schools to close sooner from the Manitoba Teachers’ Society, noting that if schools and bus routes are suspended staff members should be given full wages.

CTV News Winnipeg has reached out to the Louis Riel School Division for comment.