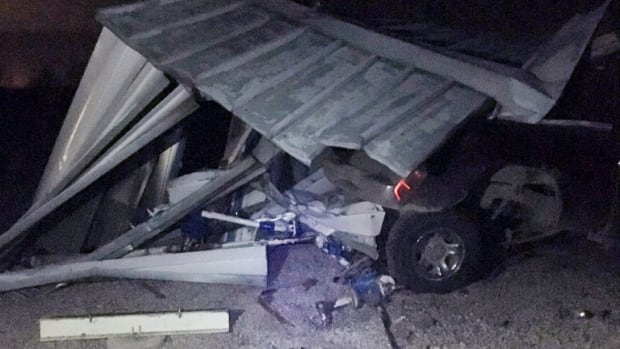 Hundreds of people were forced from their homes northeast of Winnipeg on Thursday night after a crash filled the air with potentially explosive natural gas.

A pickup truck slammed into a gas distribution centre on Highway 44, just north of the community of Tyndall, around 9:30 p.m., Manitoba Hydro officials said.

“It was extremely scary, actually. It was described by one person on the scene as it wasn’t just gas blowing, it was gas howling,” Hydro spokesperson Bruce Owen said.

“You don’t even want a hint of the ignition with natural gas around.”

Above the distribution centre — a small building where the gas pipes emerge from underground and link to the distribution network — there was a wooden pole with an electrical transformer, so emergency crews who responded to the crash called in Hydro to de-energize the transformer.

“So we did, and as a result, 50 people lost power for approximately five hours,” Owen said. Another 250 people were without natural gas service due to the crash.

About 10 families closer to the crash site were asked to evacuate their homes “out of an abundance of caution,” Owen said.

Crews with an excavator dug down to find an underground pipe with a valve that allowed them to shut off the primary source of the gas, Owen said.

A posting on the Facebook page for the Rural Municipality of Brokenhead directed evacuees to register at the Tyndall Curling Club, which also was made available to anyone without electricity or gas so they could warm up.

Classes at Gillis School in Tyndall have been cancelled for Friday as crews work to repair the damage to the gas supply from the crash.

There is no word on what caused the crash or whether anyone was hurt.

Tyndall is 40 kilometres northeast of Winnipeg.