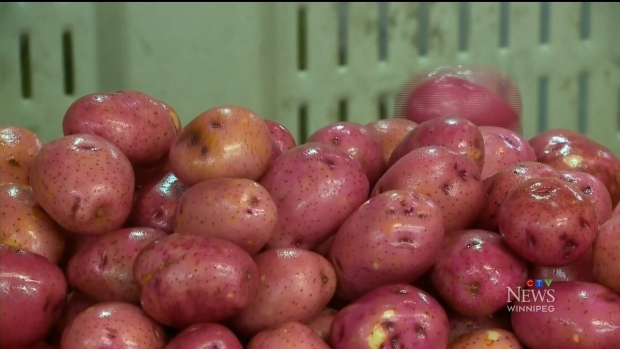 WINNIPEG — Millions of potatoes are sitting in warehouses across Manitoba with nowhere to go. With restaurants and bars closed, French fry orders have dried up and it’s trickling down to farmers.

The Wiebe family has run Beaver Creek Farms near Macgregor, Man. for more than 50 years. Wiebe ships potatoes to processing plants, but because of the pandemic production had grinded to a halt.

“Roughly 70 per cent of the market has disappeared,” said Wiebe.

He said it’s another blow after two years of bad harvest. Many farmers are still trying to recover after the October storm. “There is a possibility that some farms will either pull out of production … and people will lose jobs,”

McCains announced temporary layoffs, including at its plant in Portage la Prairie.

In a statement, president of McCain Foods Canada Danielle Barran said, “Total demand for McCain’s products have been significantly reduced due to the decline eating out.”

The food giant said a hundred million pounds of potatoes, or about 450 kilograms, worth $10 to 15 million dollars, is sitting in warehouses.

On Friday, Premier Brian Pallister called the challenges facing the agriculture industry “monumental.” “I’ll be raising that again on the call with the prime minister,” said Pallister. “It isn’t just Manitoba obviously impacted here, though we have a significant number of ag industries.”

The federal government has offered five billion dollars in loans through Farm Credit Canada. Dan Sawatzky, manager of the Keystone Potato Producers Association, said the move may hurt more than help. “It helps a little bit with cash flow, but in the end it puts farmers further in debt and makes the situation worse.”

Many in the industry are urging the federal government to buy the excess crop. “Government can help keep farmers in the sector and help address food security challenges in food banks, hospitals, seniors’ facilities, disadvantaged communities and international aid,” said the McCain Foods president.

Wiebe suggests donating the excess potatoes to food banks or others farmers to feed cattle.

Wiebed said he understands every industry is hurting because of coronavirus, but said he worries the potato industry may be overlooked.

“We just hope we’re not forgotten.”