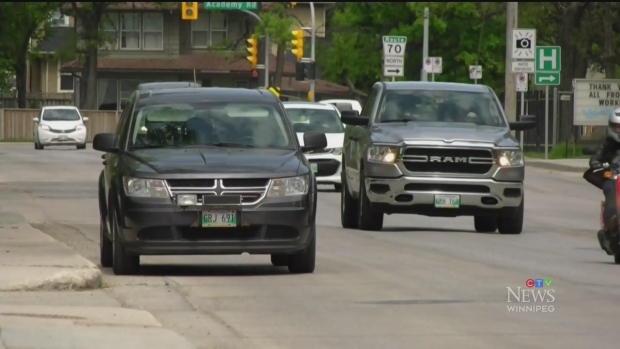 WINNIPEG — A city councillor is concerned some intersections in Winnipeg with photo enforcement may be generating a lot of speeding tickets, but not slowing drivers down.

Coun. Matt Allard, the chair of the infrastructure and public works committee, tabled a motion at city hall, calling on Winnipeg police to collect photo enforcement data from locations with the most tickets issued.

Allard says high numbers of tickets at a specific location could indicate the current road design and enforcement are failing to stop speeders.

“We want the program to influence drivers’ behaviour,” Allard said. “If there are hot spots, if we are finding out that driver behaviour is not changing, then what can we do?”

Allard wants the city to study the potential hot spots for ways they can be improved, which could include added speed signage and traffic calming measures to better alert drivers and slow them down.

“Let’s see what we can do to improve safety in terms of our design and also in the area of photo enforcement,” said Mayor Brian Bowman.

Wise Up Winnipeg has long called for better signage and a change to speed limits. Todd Dube, a founder of the advocacy group, says no study is needed.

“If they were to correct the speed limit to their own engineering recommendations and improve signage – this epidemic of speeding in Winnipeg would be gone overnight,” he said.

“Enforcement efforts through photo enforcement have been consistent and demonstrate changing driving behaviour at locations enforced, as is evidenced by the reduction in tickets issued year over year,” Winnipeg police Traffic Division Insp. Gord Spado said in a written statement.

As for Allard, he said he has been clear – photo enforcement has a role as long as it is a deterrent to speeding, especially in school zones where speed is more dangerous.

“I believe that we should be doing everything we can to address that issue,” he said.

The police service also said it would like to be able to deploy photo enforcement in areas where risky driving behaviour is taking place.

Currently, the service is limited to school zones, playgrounds, and construction sites.