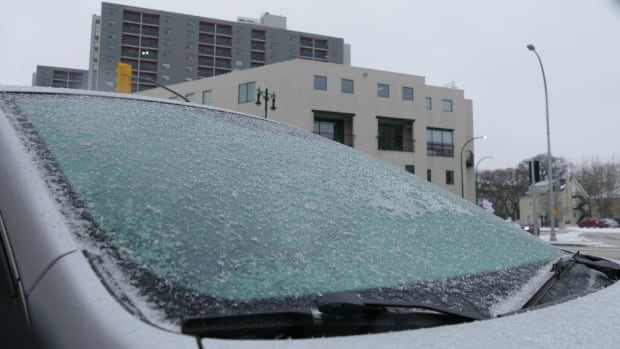 A band of freezing moved through southern Manitoba on Saturday, just in time for a cold snap to begin creeping into the northwest region of the province.

A freezing rain warning was issued Saturday for much of the Red River Valley, the Portage la Prairie region, the city of Winnipeg, and the Whiteshell, but had ended as of 3 p.m. Saturday.

The rained prompted Manitoba Infrastructure to close Highway 1 between Headingley and Portage la Prairie. It has since re-opened, but the entire length of Highway 26 — from St. François Xavier to Portage la Prairie — remains closed, as of 5:10 p.m.

Highway 44 has also been closed from east of Beasejour, near Seddons Corner, due to a motor vehicle collision, as of 4:36 p.m. Saturday.

Closure gates or signs may not be present at all closure locations, the province said.

Manitoba RCMP said Saturday afternoon that road conditions were deteriorating and several collisions were reported between Headingley and Elie.

Environment Canada said freezing rain was expected to spread east along the Trans-Canada Highway corridor for one to two hours of freezing rain, mixed with snow at times, before it tapered off.

As the freezing rain moved out, cold weather began to set in. An extreme cold warning has been issued for Tadoule Lake and Brochet, where a period of very cold wind chills are expected, according to Environment Canada.

Temperatures will plummet into the -30 to -35 C range, and could feel like -45 combined with northwesterly winds near 15 km/h.

Frostbite can develop within minutes on exposed skin.

The cold weather is also expected to move into southern Manitoba later Sunday, with the temperature in Winnipeg expected to fall to -18 C in the afternoon.