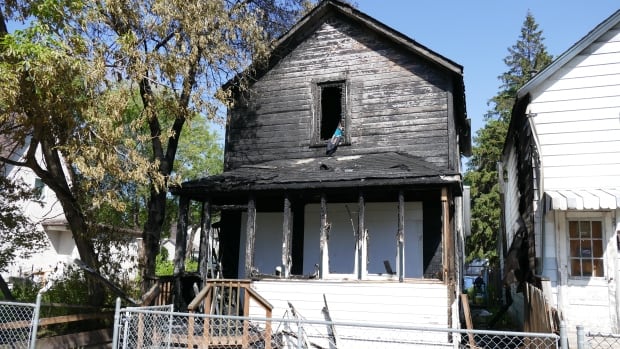 Five people crawled out the window of a burning home in one of four fires around Winnipeg Sunday night and into Monday morning.

A 1½-storey home on Disraeli Street in the city’s Point Douglas neighbourhood — between Sutherland and Rover avenues — was already engulfed in flames when emergency crews arrived around 3:30 a.m. Monday

The five residents were outside after escaping through the window. None were injured but they were assessed by paramedics just to be sure.

Crews were called back about three hours later after someone called to report smoke coming from the house. The smouldering hot spots were quickly extinguished.

The cause of the fire was determined to be careless disposal of cigarette.

A two-storey home in the city’s West End is expected to be a complete loss after a fire Sunday night.

Crews were sent around 11:25 p.m. to the home on Agnes Street, off Sargent Avenue, after reports of heavy smoke and flames.

The fire was extinguished about an hour later but the house endured significant smoke, fire and water damage, says a news release from the Winnipeg Fire Paramedic Service.

The cause of the fire remains under investigation.

Fire crews rushed to a 2½-storey duplex on Alfred Avenue near Salter Street in the city’s North End at 1:50 a.m. Monday.

The fire was declared under control at 2:14 a.m. and a search found no occupants inside, the fire-paramedic service said.

Crews were called back after a hot spot reignited around 4:32 a.m.

The cause of the fire remains under investigation.

The careless disposal of a cigarette is also blamed for a deck fire at a home in Elmwood on Monday.

Crews were called around 8:15 a.m. to a bungalow on Harbison Avenue E. off Grey Street. The flames were threatening the attached home, the fire department said.

The fire was quickly brought under control and no injuries were reported.