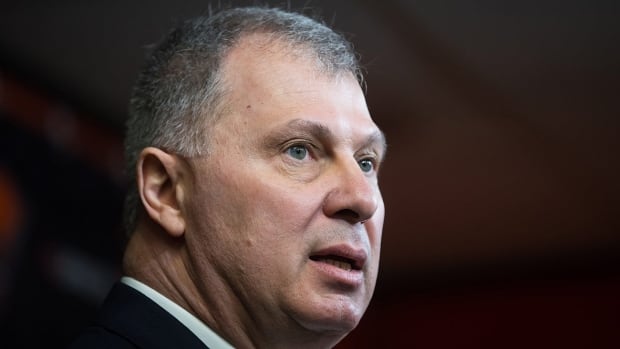 Commissioner Randy Ambrosie continues to work with the federal government, but isn’t banking on CFL-specific funding to help the league through the COVID-19 pandemic.

The CFL approached Ottawa last month for financial assistance. The league’s three-part proposal called for $30 million immediately, additional monies for an abbreviated season and up to $120 million more in the event of a cancelled season.

“For the moment we continue to be in discussions with the federal government,” Ambrosie said Tuesday. “They’ve pointed us to some of the programs they’ve created that are in the general marketplace and we’re looking at those today and that process will continue.

“Right now, that’s where we are. We’re looking more at what’s already in the marketplace by way of solutions as opposed to one that’s stand-alone.”

Like all professional sports, the CFL has been severely impacted by the COVID-19 pandemic. Last week, Ambrosie told season-ticket holders the league’s best-case scenario is starting an abbreviated season in September, but reiterated a cancelled campaign also remains a definite possibility.

The CFL is also examining the potential of playing games without fans in the stands. It’s certainly a financially challenging prospect given franchises all rely heavily upon gate receipts for their bottom lines.

During the pandemic, Ambrosie said CFL clubs have all incurred expenses — paying off-season player bonuses, coaches, football operations and administration staff and general office overhead — without the benefit of incoming revenues. That’s prompted suggestions whether an abbreviated 2020 season would be viable without spectators in the stands.

“I’d say under even of the best of scenarios, it’s going to be financially challenging,” Ambrosie said. “How we set ourselves up for 2021 and beyond might be a motivator to be more inclined to suffering some pain in 2020.

“But if all you’re doing is suffering pain in 2020 and then acknowledging you’ve got more pain to come, that’s not a very compelling business argument. That [expense] is the nature of this beast but you don’t have to look far to see challenging circumstances … this is causing tremendous pressure everywhere.”

The shortened season could run until December and the league is moving away from its traditional Grey Cup Festival format. 1:59

Ambrosie said the league plans this week to discuss when all teams can reopen their facilities.

The league ordered its teams in March to close facilities to players due to the COVID-19 pandemic. Earlier this month, the Ontario government gave CFL clubs in the province the go-ahead to reopen their facilities.

That would allow players, coaches and management with the Toronto Argonauts, Hamilton Tiger-Cats and Ottawa Redblacks back into their respective buildings so long as strict health-and-safety guidelines remain in place.

“We’re going to be discussing that this week,” Ambrosie said. “We want to be very cautious and part of the process is you have to be certain you can do it right … you have to not only have a good plan but be able to execute against that plan.

“That’s one of the things we’re talking about.”

Ambrosie also divulged last week a change to the CFL’s 2020 Grey Cup plans. Regina was scheduled to host this year’s game, but instead has been awarded the 2022 contest with Hamilton remaining on board to host in 2021.

In the event of an abbreviated season where CFL teams play in their home stadiums, the Grey Cup finalist with the best regular-season record would host the CFL championship game.

But there are questions surrounding whether that model would work if the CFL adopted the hub-city approach. That’s where teams would gather in one or two host cities.

Greg Dick, the CFL’s chief financial officer, last week told league podcast The Waggle that in a hub-city setup, the win-and-host Grey Cup model might not apply. On Tuesday, Ambrosie reiterated the league continues to examine hub cities but was much less definitive on a potential Grey Cup format under that scenario.

“We have some signals for sure, certain cities have been more advanced in their prognostications about what they will allow … right now there’s a lot more speculation in the market than absolute bedrock facts.”

Dick also suggested that with the CFL hoping to start its season in September, a logical drop-dead date for the league would come in August. But again, Ambrosie was much less emphatic.

“My framing on this has remained consistent,” he said. “I think it’s when we have all the information we need.

“So it’s not so much a calendar issue as it is an information issue … the discussions are ongoing.”

Regina, Winnipeg and Edmonton have been mentioned as viable CFL hub cities. Ambrosie reiterated discussions continue, but added southern Ontario has merit as a potential site.

“You have two facilities within driving distance, BMO Field and Tim Hortons Field,” he said. “You have training facilities in London [Western University], Guelph, Waterloo, Laurier, McMaster, U of T and York.

“You start to look at that and think, ‘Well, that’s interesting,’ by way of facilities that could be used. But again, we’re just looking at everything and not reaching any decisions.”