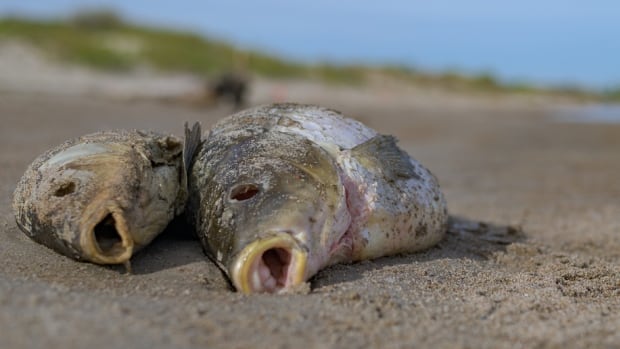 Provincial fisheries scientists say they don’t know what killed thousands of carp on Lake Winnipeg earlier this year — and they don’t intend to investigate further.

In June and early July, thousands of common carp washed up on the shores of Lake Winnipeg’s southern basin.

The freshwater fish, which can grow as long as a metre, washed up on the east side of lake in such large numbers, carcasses could be found rotting on the sand or rocks every few metres on some stretches of shore between Patricia Beach and Victoria Beach.

In June, provincial fisheries scientists collected tissue samples from the dead fish and tested them for two viruses: koi herpesvirus — which has been present in Manitoba since 2008 — and spring viraemia of carp, which has never been found in Manitoba.

Neither virus was found in the dead fish.

“Results from the carp tissue tests have come back negative for both koi herpesvirus and spring viraemia of carp virus. Based on the evidence collected to date, Manitoba Agriculture and Resource Development (ARD) is unable to determine what caused this die off,” the province said in a statement.

“At this time there will be no further investigation.”

Common carp are an invasive species from Europe, introduced into Manitoba in 1886, according to the Invasive Species Council of Manitoba. They’re considered a pest species because they stir up dirt and destroy vegetation at the edge of marshes.

Their rotting bodies, however, create an unsightly mess and malodorous stench. The province advocates people bury the carcasses at a depth of half a metre.

In June, University of Winnipeg ecologist Scott Forbes said there are two common causes for fish kill other than disease.

One is anoxia, or the absence of oxygen. This is uncommon in stretches of open water such as Lake Winnipeg’s southern basin, he said.

Another is high water temperatures, which were not present in June.