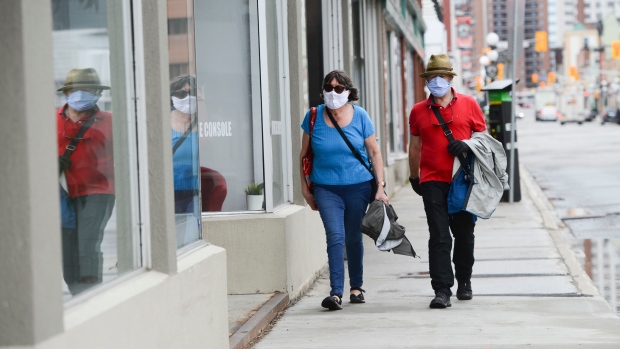 TORONTO — A majority of Canadians surveyed say more funding is needed for people and businesses hurt by the COVID-19 pandemic, according to a new poll.

The Nanos Research poll, commissioned by CTV News, found that 60 per cent of respondents believe at least “somewhat more” financial aid is required before a return to normal. One in 10 Canadians said less aid is needed, while one in four said the right amount is already available.

To date, the Canadian government has received more than seven million unique applications to the Canada Emergency Response Benefit (CERB) and has paid out more than $25 billion in aid money. This week, Parliament fast-tracked and passed a $9-billion fund for students struggling during the pandemic.

The new poll, which surveyed 1,049 adults in late April, suggests that Canadians expect the impact of the pandemic to get even worse, said pollster Nik Nanos, noting that the survey was designed to get Canadians’ vision of the “post-outbreak period.” Even with the aggressive stimulus package, most still believe more aid is needed.

“It’s almost like Canadians expect things to get ugly,” he told CTVNews.ca, calling the pandemic a “one-two punch” hitting the country in the health and economic gut. “They’re bracing themselves for the bad news.”

The poll also asked respondents about how the government might be able to manage the debt from aid provided and how soon businesses should be allowed to reopen and begin to recoup their own losses.

Respondents were less unified about government debt, with more than one-quarter of respondents saying the government should maintain current programs and allow the debt to grow, while another quarter said taxes should be increased on businesses. Eighteen per cent supported an increase in HST, while 17 per cent supported cuts to programs and services.

Just nine per cent supported increasing taxes on individuals, which Nanos said makes one thing quite clear: “They don’t want to pay for the bill,” he said.

Meanwhile, across the country, strategies for reopening the provinces and territories are beginning to materialize so that businesses can make money again, but Canadians remain uncertain of how soon they should be allowed to open their doors.

Only five per cent said businesses should reopen immediately, which was among the most surprising results of the poll, said Nanos, noting recent protests in Canada calling for a return to work. The poll results suggest that those activists represent “a very small minority of the population at this point in time,” he said.

“There aren’t a lot of Canadians who believe or expect that businesses will open in the short term,” said Nanos. “This speaks to the uncertainty that Canadians have and also the conflicting information that they’re seeing in other countries that have different approaches.”

The poll revealed that Canadians were somewhat unified on two fronts: physical distancing and closed borders. Some 95 per cent of respondents said they are practising physical distancing, and 92 per cent said they at least somewhat support keeping the border between the U.S. and Canada closed to non-essential travel until the number of new cases south of the border drops significantly, even if that takes several months or longer.