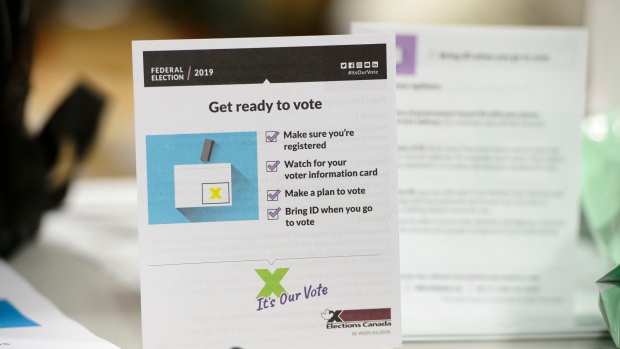 OTTAWA — Elections Canada says it would be able to run a general election amid the ongoing COVID-19 pandemic, but is anticipating an uptick in mail-in voting and is eyeing updates to federal elections law to allow more flexibility for voters and those running the vote, including big changes around when people cast their ballots.

In an update on their ongoing elections-readiness planning in the context of COVID-19 , the federal elections agency says that, in order to make voting more accessible and safe, the Canada Elections Act could use some amendments.

In particular, Elections Canada is suggesting a weekend election, featuring a two-day polling period on a Saturday and Sunday, instead of the traditional one-day vote usually held on a Monday. This would give Elections Canada the ability to set up polling places in larger locations that may not be available mid-week, to enhance physical distancing and help with recruiting poll workers.

Given the high-risk environment that long-term care facilities have proven to be during this pandemic, Elections Canada is also looking to have Parliament change the law to increase the number of voting days for electors in these care homes, which would prevent poll workers from having to enter multiple facilities in a day.

As well, Elections Canada is suggesting allowing mail-in ballots sent before the deadline to be accepted up until the day after polls close.

The agency says they intend to make formal recommendations to Parliament about legislative changes once the new session begins and after they consult with Canadians, as well as stakeholders such as political parties and the Public Health Agency of Canada.

“The health and safety of all participants in the electoral process is of paramount importance: this includes electors, thousands of election workers and candidates and their workers,” reads the latest update from the agency.

Because of the Liberal minority, it’s possible the next federal election will be called well in advance of the next scheduled vote in 2022. There are a series of key confidence votes slated to happen in the weeks following the resumption of Parliament on Sept. 23 and there has been preliminary talk from some opposition parties of wanting to try to bring down the government at that time.

Given the prospect of a snap election being called as early as this fall, Elections Canada is already working to put in place some interim measures that won’t require parliamentary approval.

Already, Canadian elections law allows for advanced voting, as well as mail-in voting on top of the usual election day option, but how they will be handled should there be a general election while the pandemic is still impacting the country.

In response, a series of administrative changes have already been approved and are now in the process of being implemented.

These new measures include:

The agency also notes that the more time they have before the next election day comes, the more measures they’ll be able to put in place.

It’s also warning Canadians that there may be delays at the polls on account of the extra layers of safety measures as well as the possibility of a significantly increased volume of mail-in ballots.

VIRTUAL VOTING NOT BEING CONSIDERED

While so many services and day-to-day aspects of Canadians have gone online in the wake of the pandemic, Elections Canada says it has not considered introducing internet voting.

“Implementing such a change would require significant planning and testing in order to ensure that the agency preserves certain aspects of the vote, including confidentiality, secrecy, reliability and integrity. Given the current operational and time constraints, this option cannot be explored properly at this time,” the agency says.

It has also commissioned research into Canadian’s views on going to the polls at a time like this, to assess how voter turnout and interest in certain voting methods may change from elections past.

As of mid-August, Elections Canada says the results indicated that the majority of Canadians would still prefer to vote in-person at a polling station, while nearly 22 per cent say they’d prefer to vote by mail.

If that percentage of the 18.4 million registered voters opt to mail in their vote, it would mean around four million mail-in ballots for the next federal election, up from the 49,545 electors who voted by mail in 2019. Of those, 34,142 were international voters.

With the possibility of a second wave, or other changes in Canada’s epidemic, Elections Canada says it’ll continue to adapt its approach should the situation evolve drastically by the time the writ is dropped.

This includes taking a never-before taken step in Canadian election history: seeing the Chief Electoral Officer certify that Elections Canada could not administer the election in one or several electoral districts be halted, should public health experts advise that the outbreak in that community or ridings is too severe to safely open polling places.

All told, the agency says it’s yet to determine how much these pandemic preparedness measures would cost.