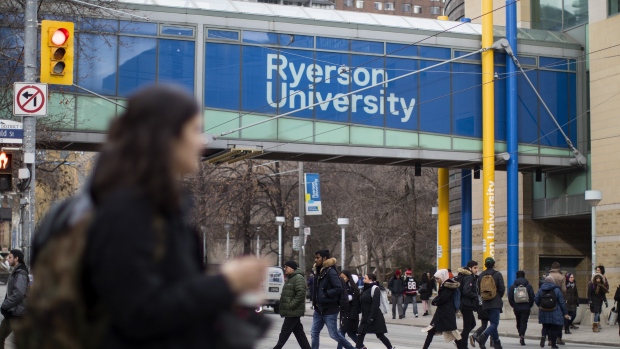 TORONTO — Some post-secondary classes in Canada are on hold until Friday, as professors and academics show their solidarity for racial justice by protesting police brutality in the U.S. and Canada.

As part of the Scholar Strike, professors will not be in class Sept. 9-10 and say they will instead “use this time to organize public digital teach-ins on police brutality and violence” available for free to both students and the general public.

Beverly Bain, a professor at the University of Toronto and a co-organizer of the strike, told CTV’s Your Morning that university professors are not immune to racism.

“We are also part of the community, we are also racialized faculty… We also experience and are predisposed to that kind of violence in the real world,” Bain said in an interview on Wednesday.

Those involved in the strike are from the four Toronto universities, including the University of Toronto, Ontario College of Art and Design (OCAD), York University, and Ryerson University. Some educators at other institutions across Canada such as Dalhousie University, McMaster University and Laurentian University have organized their own strikes in solidarity.

The strike has received support via a joint statement from the four faculty associations of those Toronto-area universities. However, Bain characterizes their support as “an acknowledgement, but not a full endorsement.”

The organizers of the strike have presented a list of demands to their institutions. One of the major changes they’re calling for is the defunding of police and the removal of campus police, with those funds being redirected to Black, Indigenous, racialized, queer and trans communities.

Bain said their other demands include more mental health and health-care services at institutions to support cultural workers, affordable education and housing for cultural students, and to prioritize the hiring of Black and Indigenous faculty.

“We’re calling for more of our universities and institutions to hire more Black, racialized, Indigenous faculty and ensure that jobs are secured and tenured, and also… that our pedagogical and academic tools are validated within the institutions,” Bain said.

Bain said the goal of the strike is to ensure that the “policies and practices within our institutions are actually supportive and just to faculty and students.”

Bain explained that the “killing, beating and murder” of Black people in the United States — George Floyd, Jacob Blake, Breonna Taylor and many others — have brought the country to a breaking point. While the racism experienced in the U.S. may not be to the same degree, Bain said it still exists in Canada.

“We’re seeing all of this happen here, right here in Canada, and how police violence has become the intersection of the coronavirus. We have seen how people have been on the streets protesting and calling for an end to police violence, calling for defunding of police, and yet we continue to see the violence escalate in terms of police brutality and shootings,” Bain said.

She pointed to recent cases in Canada including that of D’Andre Campbell, Ejaz Choudry, Chantel Moore and Rodney Levi who were Black and Indigenous people shot by police as well as the police involvement in the death of Regis Korchinski Paquet.

Bain added that teaching students about incidents of police violence is critical in addressing racism.

“The work that we do as academics is an extension of what goes on in the real world and in the everyday life. It’s critical that we teach this stuff in the university around social justice, around anti-Black violence, [and] around anti-Black police violence,” she said.