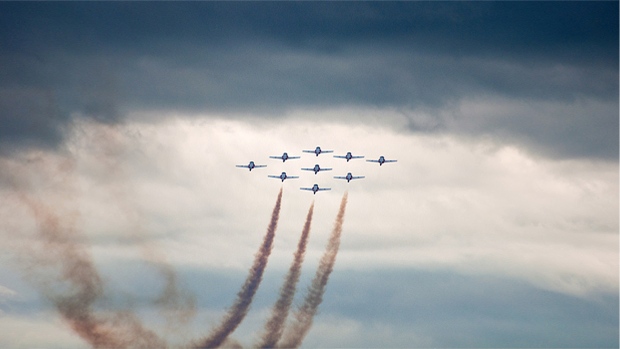 WINNIPEG — If Winnipeggers happen to look up to the sky Tuesday morning, they may be treated to a bit of an airshow. The Canadian Forces Snowbirds have announced they will be flying over the city Tuesday morning.

The Snowbirds’ signature nine-jet formation – trailing white smoke – will fly over Winnipeg around 9:30 a.m., according to the official Canadian Forces Snowbirds’ Twitter page.

The Snowbirds have been making their way across Canadian cities as a part of Operation INSPIRATION, a mission to salute Canadians doing their part to fight the spread of COVID-19, according to a Canadian National Defense news release.

The Snowbirds’ will release the anticipated routes, locations, and times on social media each day, according to the news release.

TUESDAY: Winnipeg, expect to see us at 0930 on Tuesday. Route maps to follow.

“The iconic Snowbirds have a special place in the hearts of many Canadians,” Canadian Minister of National Defence Harjit S. Sajjan said in a news release.

“We hope that their presence over Canadian cities and towns to acknowledge the hard work being done by Canadians in our grocery stores, our pharmacies, our hospitals and long-term care facilities lift up Canadians during these difficult times.”

The Canadian Armed Forces encouraged Canadians to watch the flyovers from their homes and refrain from travelling to see the flyovers.

The Snowbirds began their flyovers in Nova Scotia in April.