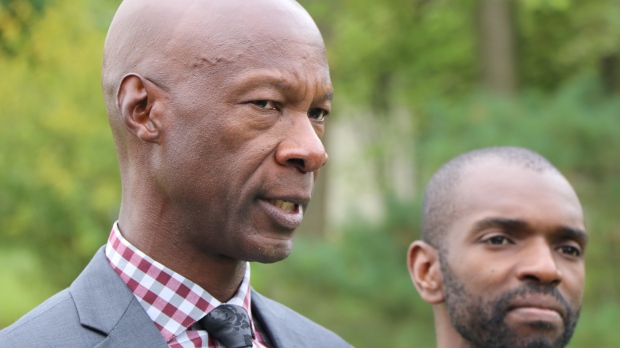 TORONTO — A former police chief in Winnipeg is adding his voice to the chorus calling for police officers to be separated from duties that have little if anything to do with law enforcement.

“I would never dispatch a police officer to someone who’s having a heart attack, something that requires medical attention – but I think, in many cases, we’re sending the police to events that are strictly medical, where people need someone else,” Devon Clunis told CTV’s Your Morning on Tuesday.

“Police have become the catch-alls of anything and everything happening in the community, and I think we’re recognizing that the system really is failing us.”

Questions around the future of policing have become a major issue in both Canada and the U.S. in recent weeks. In Canada, the conversation has been shaped in part by the fatal police shootings of two Indigenous Canadians, Chantel Moore on June 4 and Rodney Levi on June 13.

Moore was shot after police were dispatched to her apartment to check on her well-being. Police have said she lunged at officers with a knife. Levi was said by police to be carrying knives when he was killed at a barbecue at a minister’s house. Police have said they were called to the house to deal with an unwanted person, although the minister has described Levi as a “welcomed guest.”

Their deaths, among others, have amplified calls in Canada to defund police, which means moving the responsibility to respond to some emergencies from police to a new and hopefully less deadly form of law enforcement, and redirecting a large portion of police budgets to the new initiative.

Clunis, who became the first Black police chief in Canada when he was appointed to the top job in the Winnipeg Police Service in 2012, said he is not personally in favour of defunding police, but does support shifting some current police responsibilities elsewhere.

“We recognize that the current model is not serving the individual or community effectively. It’s incumbent on us to … devise a much better approach,” he said.

Clunis said that, when he became chief, Winnipeg consistently led major Canadian cities in crime and murder rates. He said one of his main goals was to convince his colleagues that the statistics were a reflection of systemic discrimination and other social problems more than they were a sign of Winnipeg being an inherently dangerous community.

“Ultimately … what we were seeing as crime was just the symptoms of deeper social issues within the community,” he said.

By addressing those issues, Clunis said, Winnipeg police were able to make the city healthier and in turn lower most statistical measures of crime in the city. However, crime rates started to increase prior to Clunis’ retirement in 2016, and have risen even more since.

Winnipeg had the highest murder rate in Canada in 2019, with 44 homicides recorded in the city. There have been 18 recorded this year.

There have also been four deadly police shootings in Winnipeg in 2020, all involving Indigenous people – including a 10-day span in April during which Eishia Hudson, Jason Collins and Stewart Andrews were all killed. Manitoba’s justice minister has said he is open to talking to municipalities about redirecting money currently spent on policing.

Clunis suggested that one possibility could be an enhanced triage system for calls to police, with officers handing emergencies over to other agencies if there are no signs of violence.

“If it’s absolutely clear that there’s no threat to life, there are no weapons involved, police don’t have to be the priority response,” he said.