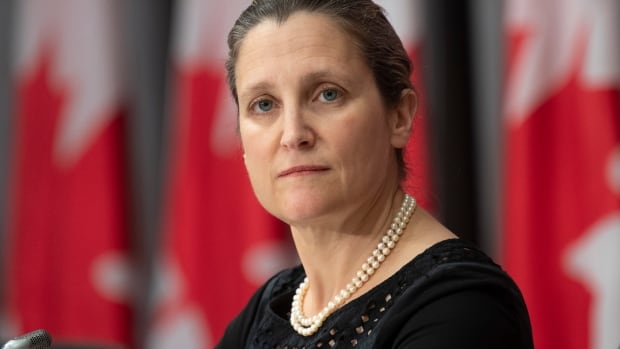 The federal government is welcoming the U.S. decision to drop tariffs on Canadian aluminum imports — but warns it’s prepared to impose retaliatory measures if necessary.

Responding to the announcement by the U.S. Trade Representative’s office that the 10 per cent levy on Canadian aluminum products would be repealed, Deputy Prime Minister and Finance Minister Chrystia Freeland said the move signals that common sense has prevailed.

“The last thing that Canadians and Americans need now in the middle of this pandemic is a trade war,” she told a news conference in Ottawa today.

A statement from the USTR said that after consultations with the Canadian government, the U.S. has determined that trade is expected to “normalize” in the last four months of the year, declining after “surges” experienced earlier in the year.

“Accordingly, the United States will modify the terms of the 10 per cent tariff imposed in August on imports of Canadian non-alloyed unwrought aluminum,” the statement reads.

The USTR’s statement lays out shipment volumes for each of those four months, which will be monitored to ensure they aren’t exceeded. If they do, the U.S. expects that imports would decline by a corresponding amount the following month.

Tariffs could be reimposed: USTR

The tariffs could be re-imposed if shipment volumes exceed 105 per cent of the stated volumes, the USTR said.

“The United States will consult with the Canadian government at the end of the year to review the state of the aluminum trade in light of trade patterns during the four-month period and expected market conditions in 2021,” the statement reads.

Freeland stressed that today’s development was not a negotiated agreement with the U.S. and said that the American administration acted “unilaterally.” Canada does not accept the imposition of quotas, she said.

“Should tariffs be reimposed, Canada will retaliate with perfectly reciprocal dollar-for-dollar tariffs,” she said.

Minister of Small Business, Export Promotion and International Trade Mary Ng said Canada did not concede anything in exchange for the USTR’s decision. She credited a collaborative approach with the federal and provincial governments and industry representatives for the positive development today.

“It is a testament to the Team Canada approach, as we all worked relentlessly to ensure these unjustified tariffs on Canadian aluminum were removed,” she said.

Business group calls on U.S. to remove threat of tariffs

The Canadian Chamber of Commerce also welcomed today’s news but noted that the USTR did not “unconditionally lift tariffs and is trying to restrict market-driven trade flows.”

“We call on the United States to fully and without precondition remove the threat that tariffs could be re-imposed in the future,” said Mark Agnew, the organization’s senior director of international trade.

“This will provide critical certainty for Canadian and American businesses during this period of great economic uncertainty. At a time when our economies are struggling with the economic fallout of COVID-19, these tariffs only exacerbated disruptions to North American supply chains.”

In a statement before the second day of a cabinet retreat in Ottawa, Trudeau said the government would act to protect Canada’s aluminum industry.

“I want to highlight that we will be taking action to counter the unjust tariffs put on Canadian aluminum by the United States,” he said.

“As I’ve said many times, we will always be there to defend Canadian workers. We will defend our aluminum sector.”

The government had said during the summer that unless the U.S. dropped its latest round of aluminum tariffs, Canada would impose $3.6 billion in counter-measures.

NDP Leader Jagmeet Singh said the tariffs and counter-tariffs would hurt workers on both sides of the border because the aluminum sector is so interconnected. He said the government should have done more to convince the Americans not to impose the duties in the first place.

“I think we knew that the president of the United States has done something like this in the past. We should have put in place steps ahead of time and been proactive to prevent this from happening,” he said.

U. S. Chamber of Commerce executive vice-president Myron Brilliant issued a statement welcoming the news that the U.S. will drop what the organization called “damaging” tariffs.

“What American manufacturers need now is certainty that these tariffs won’t make another reappearance. Setting aside these threats once and for all will allow American job creators to focus on economic recovery,” the statement reads.

Trump announced that he would impose the tariffs during a campaign speech at a Whirlpool factory in Ohio, citing national security concerns.

At the time, Freeland responded quickly by stating that Canada “intends to swiftly impose dollar-for-dollar countermeasures” in response.

He urged Ontario residents to “hit ’em where it hurts,” noting that the province’s consumer base is an economic powerhouse.