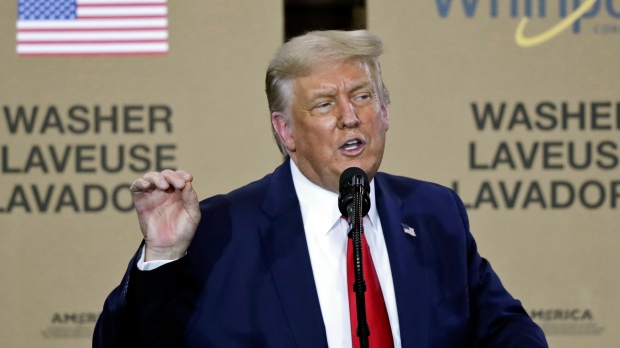 OTTAWA — U.S. President Donald Trump is imposing a new 10 per cent tariff on Canadian aluminum imports that is set to imminently come into effect.

In announcing the new trade action at an event in Ohio, Trump said that: “Canada was taking advantage of us, as usual.”

The federal government was informed by the U.S. administration that the new tariff was coming, and will apply to unprocessed Canadian aluminum.

Trump claimed on Thursday that the American aluminum business has been “decimated” by Canada, calling it “very unfair” and accusing Canadian producers of flooding the U.S. with exports.

He also said that the new tariffs are “absolutely necessary,” and pledged he will “always put American workers first,” and use all tools at his disposal—including tariffs—to do that.

The United States had been considering whether to slap tariffs on aluminum imports coming from Canada, under Section 232 of the U.S. Trade Expansion Act, unless Canada agreed to restrict its export volumes through quotas.

Responding to the initial threat, Prime Minister Justin Trudeau said that the U.S. “needs Canadian aluminum,” as it does not produce enough to fill its domestic manufacturing needs.

“If they put tariffs on Canadian aluminum, they’re simply increasing the costs of inputs, necessary inputs, to their manufacturing base which will hurt the American economy. Again, we see that our economies are so interlinked that punitive actions by the United States administration end up hurting Americans the same way they end up hurting Canadians,” Trudeau said back in June.

Trudeau has yet to comment on the re-opening of this trade rift between Canada and the U.S.

“The U.S. administration has been foreshadowing new tariffs on Canadian aluminum for weeks, so why didn’t the Trudeau government take action to protect Canadian workers?” reads the joint statement.

“The aluminum sector is vital to the Canadian economy. It’s essential that this industry thrive, especially during COVID-19,” said the Conservative MPs.

In a statement, NDP MP and the party’s international trade critic Daniel Blaikie said his thoughts were with the aluminum workers who will be hurt by Trump’s “electioneering” and the lack of Liberal action at home. He is calling for a federal plan to help protect Canadian aluminum jobs.

The Canadian Chamber of Commerce is condemning the U.S. move., saying the tariffs will “only exacerbate disruptions to North American supply chains.”

In a statement the Chamber’s Senior Director of International Trade Mark Agnew said that Canadian aluminum exports pose “absolutely no national security threat” and the move is just as wrong as it was when it was tried by Trump in 2018.

NOT THE FIRST TIME

Trump hit Canada with steel and aluminum tariffs in May 2018, during negotiations for the new NAFTA deal. The tariffs remained in place for a year, during which time Canada reciprocated with dollar-for-dollar countermeasures on American steel, aluminum, as well as levelling a surtax on other goods.

A year later, Canada and the U.S. issued a joint statement announcing a decision to lift the tariffs, confirming that the two nations also agreed to terminate World Trade Organization litigation Canada launched after slamming the U.S. tariffs as “punitive” and “an affront” to Canada-U.S. relations.

The new NAFTA came into effect on July 1, meaning this latest American trade action comes just over a month into the new deal.

The largest private sector union has called on Trudeau to “stand firm” against the prospect of the re-imposition of tariffs and has suggested that Canada should retaliate.

Speaking to the prospect of the tariffs, Unifor National President Jerry Dias has called the prospective tariffs “totally unwarranted.”

Dias has said that the arguments that American steel producers are making to the Trump administration about the need for intervention — including that a surge in Canadian aluminum imports is causing aluminum prices to collapse — are “preposterous and utterly divorced from reality,” because globally, due to COVID-19, demand for metal has gone down and that’s led to the declining prices.

The Conservatives are now calling for immediate retaliation to “send a clear message to the U.S. that we will not restrict our exports.”

Industry representatives are calling on Deputy Prime Minister Chrystia Freeland to begin consulting the business community on what the government’s retaliatory response will be.