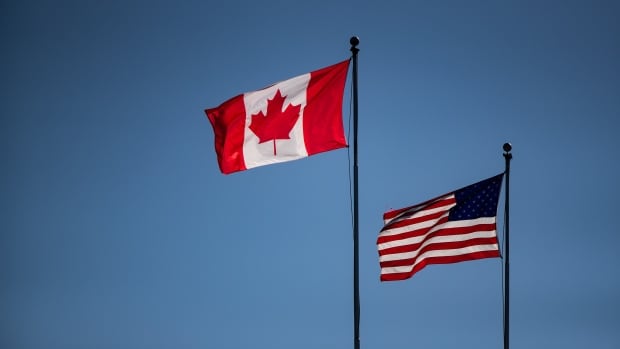 Canada and the United States have agreed to restrict non-essential travel across the border as both countries try to slow the spread of the novel coronavirus — but they insist key supplies will still flow between the two nations.

“These measures will last in place as long as we feel they need to last,” he told reporters from outside his home at Rideau Cottage, on the grounds of Rideau Hall in Ottawa, where he’s in self-isolation.

“In both our countries, we’re encouraging people to stay home. We’re telling our citizens not to visit their neighbours if they don’t absolutely have to.”

Canadian citizens will be able to get home, although the government says travellers presenting symptoms won’t be able to board flights.

Public Safety Minister Bill Blair said that Canadians and Americans who cross the border every day to do essential work will not be affected.

“We know, for example, there are many border cities where citizens on one side of the border travel each day across that border to work in hospitals and to provide other essential services,” he said. “We have to make sure those people can get to work.”

Blair also said international students, workers on visas and temporary foreign workers will also be able to enter Canada, with the expectation that they’ll respect the government’s request to self-isolate for 14 days.

Prime Minister Justin Trudeau announced that travellers will no longer be able to cross the border for recreational and tourism purposes. 1:36

The Prime Minister’s Office said it is still negotiating the start date and will be able to announce it “soon.”

Trudeau said both sides agreed to preserve the supply chains which ensure that food, fuel and life-saving medicines reach people on both sides of the border.

“Supply chains, including trucking, will not be affected by this new measure,” he said.

At his own press conference in Washington, Trump said the temporary restrictions, which he stressed were the result of a mutual decision, could last a month.

“I think essential is medical, we have military working together, we have industry working together, and again it’s not affecting trade, so things like that. But just leisurely — let’s go to a restaurant to have dinner, which a lot of people do, they come both ways, they go on both directions, that kind of thing we have ended on a temporary basis.”

Restricting travel in Canada on the table: Trudeau

When asked if he’s considering limiting travel within Canada, Trudeau said his government is “looking at all options.”

“We will continue to look at measures as they become necessary,” he said, adding that invoking the Emergencies Act would be a “significant step.”

“Not one that we feel we need today, but not one we are closing the door to in the future if necessary.”

We will be, by mutual consent, temporarily closing our Northern Border with Canada to non-essential traffic. Trade will not be affected. Details to follow!

The Emergencies Act allows the federal government to declare a public welfare emergency and empowers it to
prohibit travel, requisition and use property, order qualified people to provide essential services and regulate the distribution of goods.

Ottawa has to consult with the provinces before triggering it and seek parliamentary approval within seven sitting days.

WATCH: PM assures Canadians the economy will ‘bounce back strongly’

PM Justin Trudeau announced a $82 billion aid package to help individuals and businesses during the COVID-19 crisis and assured Canadians the economy will recover quickly.  1:06

The Emergencies Act, which came into effect in 1988, has never been invoked by the federal government. It replaced the War Measures Act, last used by Trudeau’s father during the 1970 FLQ crisis.

On Monday, when Trudeau announced his government would deny entry to almost all foreigners, he made an exception for Americans — but added that exception would be reviewed.

The government already has said Canadians crossing at a land border will be screened for symptoms. Sick individuals will be referred to public health authorities on the Canadian side of the border, but they will be allowed into the country.

Major crossings will have quarantine officers on site to intercept the sick and supply masks.

“We know there are very many Canadians who are presently in the United States and are very quickly making their way home, and I want to assure them all, Canadians will always be allowed to return to Canada,” Public Safety Minister Bill Blair said Tuesday of people crossing by land.

In 2019, 25 million travellers entered Canada from the U.S., according to Statistics Canada, while Canadian residents returned from 43.8 million trips to the United States that year.