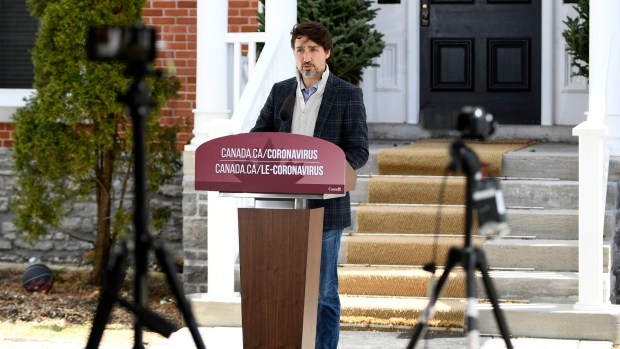 TORONTO — The Canada-U.S. border will remain closed to non-essential travel for another 30 days in an effort to prevent the further spread of COVID-19, Prime Minister Justin Trudeau has confirmed.

On Saturday morning, Trudeau said the current border measures, which were due to expire on April 21, will be extended for another 30 days.

“This is an important decision and one that will keep people on both sides of the border safe,” Trudeau said during his daily briefing outside Rideau Cottage in Ottawa on Saturday.

The confirmation comes a day after sources revealed to CTV News that the mutual agreement between the two countries was to be extended.

The current measures, which took effect on March 21, restrict all non-essential travel across the border, but allow for the flow of trade and commerce, as well as health-care workers who cross the border for work, to continue.

Trudeau took a moment to thank Public Safety Minister Bill Blair for his leadership in working with U.S. officials on the agreement and cited it as an example of the “excellent collaboration between our two countries.”

While U.S. President Donald Trump said earlier in the week the border could open soon, Canadian government officials have been steadfast in their position that any decisions related to easing border restrictions would be made collaboratively between the two countries and not by the U.S. alone.

During his briefing, the prime minister also announced that the federal government will allocate more than $306 million to support Indigenous businesses that are struggling during the pandemic. He said the funding will be provided through Aboriginal financial institutions and administered by the National Aboriginal Capital Corporations Association.

“Today’s investment will help thousands of businesses bridge to better times, including many that are owned and run by indigenous women,” he said.

“These businesses employ people right across the country, in small communities and big cities, alike. They create good jobs in a whole range of sectors. So when we support them, we’re supporting families and workers, too.”

“Small business owners are at the heart of so many communities and this is a tough time. Whether you own a store, or a restaurant or are part of the hospitality sector. So, we’re going to be there for you,” he said. “It will get easier.”

When asked whether the government is considering providing financial aid to businesses that would not have to be repaid or if he has discussed rent forgiveness or control with the provinces, Trudeau said the topic came up in his talks with provincial leaders earlier this week.

“We are looking at it very, very closely, we have a number of proposals that are working their way through the system, talking to various industry groups and renters associations,” he said.

Trudeau stressed, however, that provinces have jurisdiction over rent and the relationships between landlords and tenants. He said that is why the federal government is working with the provinces to deal with small businesses’ fixed costs, such as rent, which aren’t covered by the existing wage subsidy.

More supplies on the way

As demand for personal protective equipment (PPE) for health-care workers across the country increases, Trudeau announced that two plane loads of N95 face masks and coveralls had arrived on Friday. He also said that more shipments of additional medical supplies were expected to arrive on the weekend and into next week.

“Over the past weeks we’ve been focused on delivering PPE to the provinces, on delivering the necessary equipment to ensure that our frontline workers who are putting their lives forward to keep Canadians safe are properly protected,” he said.

The prime minister said Canada is in a “good place” in terms of PPE supplies and that status will only improve as more Canadian producers and suppliers step in to help, such as Toronto Stamp. Trudeau said the company, which usually produces rubber stamps and identification badges, will be providing millions of face shields for front-line workers over the next two months.

“It has been something extraordinary to see the level to which Canadian manufacturers have been stepping up to get involved and we are in a much better place than we were a number of weeks ago,” he said.