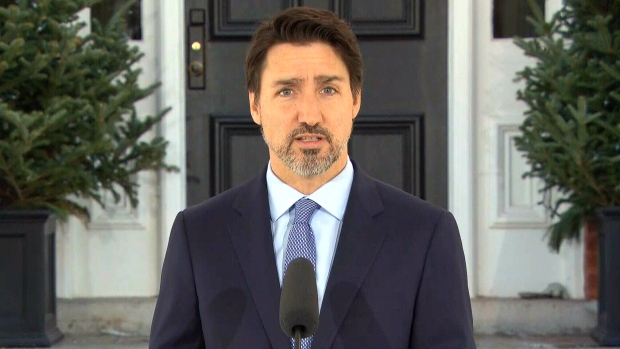 OTTAWA — Prime Minister Justin Trudeau has announced that the Canada- U.S. border will close to all non-essential travel, and that the federal government is prepared to spend a combined $82 billion on direct financial help and economic stimulus.

Moments before PM Trudeau began speaking, U.S. President Donald Trump announced that the border between Canada and the United States will be “temporarily” closed to tourists and visitors, “by mutual consent.”

The major new economic measures that the federal government is taking in response to COVID-19 include $27 billion in direct assistance to workers and families, as well as making $55 billion available in liquidity to businesses to help stabilize the economy.

Speaking from self-isolation for the third time in as many days, the prime minister is addressing the nation on the latest moving parts in his government’s response to the COVID-19 pandemic.

PM Trudeau will be followed by Finance Minister Bill Morneau and Bank of Canada Governor Stephen Poloz, who will be elaborating on new economic supports aimed at offsetting the wide-ranging impacts of the novel coronavirus outbreak and subsequent shutdowns.

The financial aid package includes ways to see money delivered directly into the hands of Canadians and their families; as well as new help for the country’s hardest-hit sectors; and broader economic stimulus measures.

As for what’s included in the $27 billion for families, aimed at relieving pressure to make rent and mortgage payments or paying for groceries:

As for what’s in the $55 billion being offered to stabilize the economy:

This massive package is equal to three per cent of Canada’s GDP.

It remains unclear precisely when non-essential travel will be restricted across the border.

The border is already closing Wednesday to most non-citizens, and international flights are being rerouted to four airports where enhanced screenings are happening and passengers returning to Canada are being instructed to enter a 14-day self-isolation, to lessen the spread of the global pandemic.

Shipments, trade and commerce will not be affected by the new restrictions at the Canada-U.S. border.

This unprecedented measure is the latest effort from governments attempting to limit the cross-border spread of COVID-19, while considering the ongoing need for workers who cross the border daily, such as truck drivers who are transporting everything from groceries to medical supplies.

Trudeau and his federal cabinet are also deliberating whether to invoke the Emergencies Act, which would grant the federal government sweeping powers to regulate the movement of people and goods within the country during a state of emergency.

As of Wednesday, Trudeau said his government is not closing the door to this measure but it’s not the step to take at this point.

Parliament is expected to be recalled imminently to pass whatever legislative measures the government needs to respond to this rapidly evolving health crisis, and Trudeau is committing that the money will flow to Canadians as quickly as possible, despite the pressure of intense demand on federal departments.