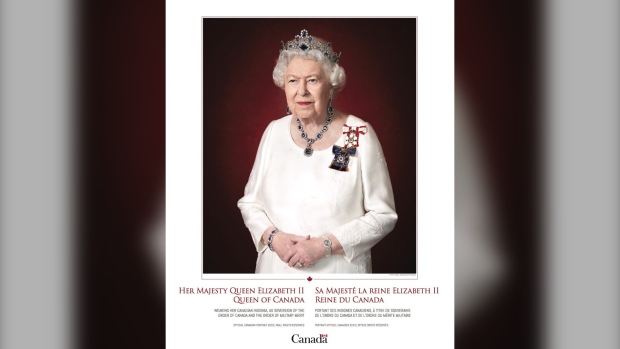 TORONTO — Queen Elizabeth II has been honoured by the Canadian government with a new official portrait.

The new portrait of the 94-year-old monarch will be displayed in government buildings, schools and embassies in tribute to Canada’s ties to the Queen through the Commonwealth.

Commissioned by the Canadian government, royal photographer Chris Jackson was hired to take the picture back in March 2019 at Windsor Castle. He shared a photo of the new portrait on social media on Friday.

“It was an incredible honour to have the opportunity to photograph HM Queen Elizabeth II on behalf of the Canadian Government for her official Canadian Portrait that has been released today,” Jackson wrote in the photo caption on Instagram.

“I’ve been lucky enough to have visited Canada many times now with members of the Royal Family and have the fondest memories of the people I’ve met and the incredible, vast and beauty country that I’ve been privileged to get to know a small part of over the years,” he added.

The last Canadian portrait of the Queen was taken in 2010 at Rideau Hall in Ottawa.

In the new image, the Queen is seen wearing a white dress adorned with her Canadian insignia: the Sovereign of the Order of Canada and the Order of Military Merit.

The Sovereign of the Order of Canada was presented to the Queen in 1970 by then-Governor General Roland Michener on his visit to London that year. She soon after wore it for the first time during a banquet in Yellowknife.

The Order of Military Merit was created in 1972 to recognize exceptional service by Canadian military members. The Queen is its highest-ranking member, serving as its fount of honour as the sovereign.

The Queen is also donning the Belgian Sapphire Tiara and a blue sapphire and diamond necklace in the new portrait, which she received as a wedding gift from her father, the late King George VI.

The jewels have a connection to Canada, as the Queen wore them during her royal tour of the country in 1990.

The Queen’s new portrait was released one day after she carried out her first public engagement outside of a royal residence since early March when the coronavirus pandemic hit.

She was joined by her grandson Prince William at the Defence Science and Technology Laboratory at Porton Down in southern England to meet with scientists battling the virus.