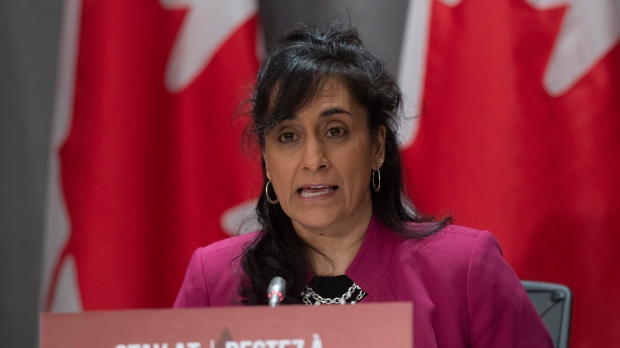 OTTAWA — As global supply chains continue to grow more unruly amid the COVID-19 pandemic, the Canadian government has curated a separate network to expedite imports of personal protective equipment (PPE) coming from China.

The ministry of procurement has signed a deal with two international firms to temporarily store and verify equipment in China – awaiting Canadian jetliners to safely retrieve the materials and return home.

Bollore Logistics – of France-based Bollore Group, a multi-national transport and logistics firm – is providing storage and transportation services within China, as well as preliminary testing capabilities.

“It’s a quick verification that the box actually has what it’s supposed to have in it but they don’t do a medical check,” said Emily Harris, director of communications for the Minister of Public Services and Procurement, Anita Anand, in an interview with CTVNews.ca

“That’s still in the [Public Health Agency of Canada] realm” when the supplies return to Canada, she said.

Newsletter sign-up: Get The COVID-19 Brief sent to your inbox

The government has also signed a deal with a global consulting firm for onsite supplier verification – its name at this time must remain anonymous, said Harris.

The ministry said this was done out of need and as a part of their risk management plan to ensure supplies like N95 respirator masks, gowns, and gloves are sent back to Canada without delay or interference.

“Given how tight supply chains are around the world and how competitive they are – it’s to avoid some of those situations we are reading about in the news internationally where orders are either being bought off the supply line or on the tarmac,” said Harris.

There are also reports of countries recalling shipments after delivered PPE failed to meet medical standards.

“International logistics are challenging. We are working closely with our partners around the world including embassies, as well as with on the ground logistics and co-ordination forms to ensure that supplies can move from source to where they are needed in Canada,” said Anand at a press briefing on April 7.

Former Canadian ambassador to China John McCallum told CTV News his successor Dominic Barton likely had a large part in ramping these efforts up on the ground, given his previous work within the country as global managing partner at McKinsey and Company.

“This is an area where he is very strong,” said McCallum. “Given that we’re in this cutthroat, Wild West environment I think it’s very smart to set up our own system.”

McCallum said the hired consultants will be vital in navigating Chinese customs and duties, a process that’s been made more strenuous since the start of the pandemic.

“It’s a good thing they’re scrutinizing the exports to make sure they’re the right quality but it’s not a good thing if they’re causing a huge delay when everybody is in a great rush,” he said.

In bypassing supply chain kinks, the ministry said its hope is to more quickly meet the dire call from health-care workers across Canada for increased medical supplies.

“There are always going to be things like border controls or countries or shifting their industries to be domestic focused and those are things we can’t control but what we can control is enhancing logistics,” said Harris.

“The transformation of the Boeing 777-300ERs, our largest international wide-body aircraft, doubles the capacity of each flight and will enable more goods to move more quickly,” said Tim Strauss, vice-president of Air Canada’s cargo team in a statement on April 1.

Prime Minister Justin Trudeau said last week the government is working with Canada Post and Amazon to distribute the PPE once it’s arrived on Canadian soil. In the meantime, provinces have filled the gaps in need. On Monday, Alberta began disseminated excess masks, gloves, ventilators, and goggles to Ontario, Quebec, and B.C.

While China continues to house the greatest volume of PPE, which Harris says justifies the resources associated with establishing a streamlined supply chain, the ministry isn’t ruling out setting up similar networks in other countries as needed.