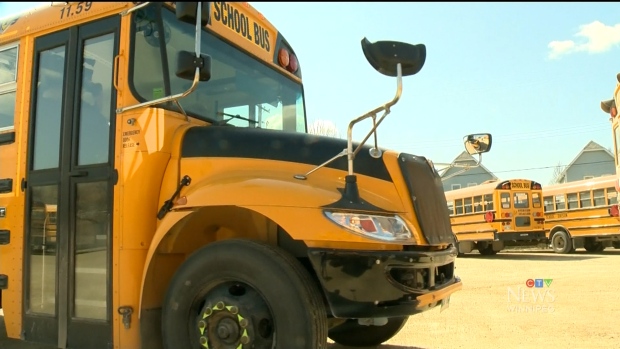 WINNIPEG — Parents in the Winnipeg School Division will have to find another way for children to arrive at school on Tuesday, as school bus drivers in the division are planning to go on strike.

“We truly feel for the parents here, but drivers are constantly being faced with increasing demands with fewer resources and compensation, and when you have an employer that’s being unreasonable, you have to stand up,” said Bea Bruske, UFCW 832 Secretary-Treasurer, in a statement.

The union represents over 90 drivers in the division, and have been without a contract since June 30, 2019.

Negotiations have been ongoing since October 2019.

The union said the province’s Bill 28 is the major issue during bargaining.

The bill implemented a two-year wage freeze for public-sector workers, followed by a 0.75 increase in the third year and one per cent in the fourth year. A Manitoba judge ruled against this bill in June 2020. The Manitoba government is appealing the decision.

In a statement, the Winnipeg School Division said parents who are impacted by the strike will receive a letter from their school to advise them of the situation, and said families are asked to make alternative arrangements for children to get to and from school safely.

The division said the strike will impact approximately 2,300 students, but service will continue for students who are transported by wheelchair transportation services.