Home  »  News   »   Bunny Boom: How to protect your garden from rabbits 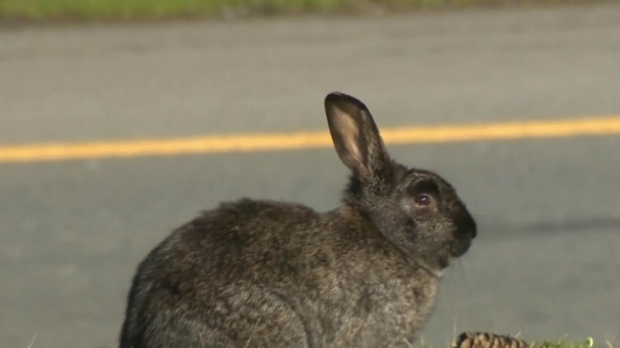 WINNIPEG — Winnipeg is seeing a bunny boom, with the creatures taking over gardens around the city.

“There’s a lot of them out there eating everyone’s new plants, their gardens, trees, you name it,” said entomologist Taz Stuart with Poulin’s Pest Control.

Stuart said Poulin’s has seen a 25 per cent increase in calls about rabbits this year over last year. He said rabbits can be difficult to get rid of, and while they’re small they can cause quite a bit of damage.

“In the wintertime, they’re usually stripping off bark. They’ll feed on anything that’s underneath the ground,” said Stuart. “In the summer, right now, there’s lots of food sources, especially with people out now gardening, putting in their new plants. They’re going to those food sources.”

Stuart said the rodent population, which includes rabbits, has been growing over the last couple of years, thanks in part to some warmer winters. He said with the increase in rodents, Winnipeg is also seeing growth in the primary predator population.

“We are seeing more coyotes and foxes, etc. out there, too.”

He expects to see a boom in their population in the next year or two.

As for how to keep the bunnies at bay, Stuart said there are ways.

“Say if you’ve got a front garden, anything that’s over 12 inches in height will stop most, but if bunnies are hungry, they will jump higher, so the higher the fence is, and it has to be a fine mesh. They can get through the size of a toonie almost in most cases if it’s one of the small, brown bunnies.”

Stuart said he’s noticed an increase in calls in the newer neighbourhoods in Winnipeg.

The city said it is not responsible for wildlife. More information about how to deal with wildlife in your yard can be found online.