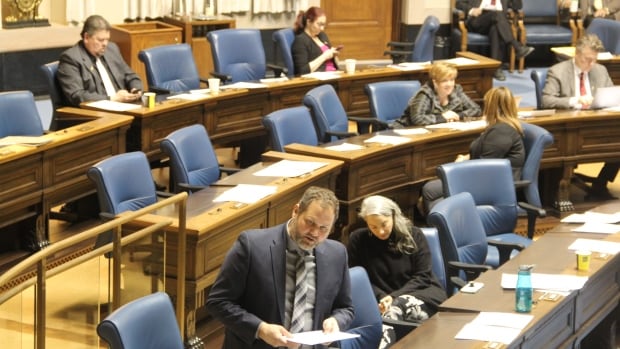 The Opposition New Democrats are running out the clock as they prevent the Manitoba government from introducing a slew of new bills.

For a fourth day, the NDP ground the usual proceedings of question period to a halt — including the provincial budget’s release — by mounting several matters of privilege, which are complaints about various matters.

The party says it is planning to keep up this tactic until Wednesday, the deadline by which the governing Progressive Conservatives must introduce bills to assure it becomes law by the summer.

The NDP’s strategy has a side-effect of blocking the release of the province’s budget, which was supposed to happen on Mar. 11.

Once the Wednesday deadline has passed, it’s expected the NDP will allow the budget’s introduction on Thursday.

Premier Brian Pallister told reporters last week he has other means to get these additional bills passed this summer even if his government doesn’t introduce them by Wednesday.

According to legislative rules, the government could ask the legislature to sit until 2 a.m., at which time a vote would be called. They may also set a time limit on debating a bill two weeks after its introduction.

The NDP has repeatedly offered the government the opportunity to table its budget and read the accompanying speech, saying it only wants to stop the introduction of about a dozen bills it says will hurt working Manitobans and their families.

The Progressive Conservatives have turned the NDP down, arguing it doesn’t have the right to pick and choose which aspects of the legislative process it wants to happen.

House leader Kelvin Goertzen said the NDP shouldn’t be playing political games while COVID-19 fears ramp up, while NDP Leader Wab Kinew says the government is using the virus as an excuse to ram through its legislative agenda.

In a statement sent late Tuesday, Goertzen appeared to suggest his party would fight back. He wrote that “should the NDP members continue with their blockade on Wednesday, the government has a number of tools in its legislative toolbox to continue moving its agenda forward.”