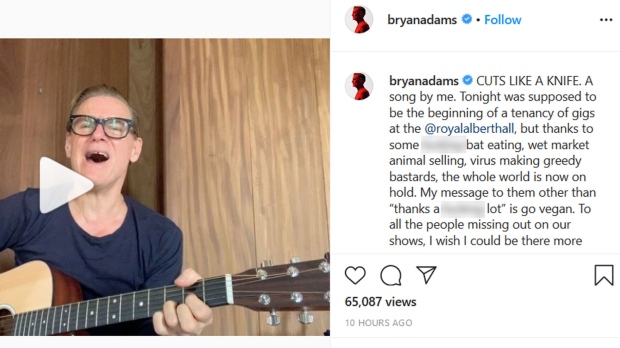 TORONTO — Canadian singer Bryan Adams is trending on social media – but for all the wrong reasons.

Adams is being accused of racism over an Instagram post that blamed “bat eating, wet market animal selling, virus making greedy bastards” for putting the world on hold, including his gigs at London’s Royal Albert Hall.

The 60-year-old posted a video on Instagram Monday of him singing his hit Cuts Like a Knife. His post said in part: “Tonight was supposed to be the beginning of a tenancy of gigs at the @royalalberthall, but thanks to some (expletive) bat eating, wet market animal selling, virus making greedy bastards, the whole world is now on hold. My message to them other than “thanks a (expletive) lot” is go vegan.

While comments on Instagram were supportive of Adams or his message, it wasn’t long before Adams’ post was trending on Twitter. Many users there called it  “racist.”

NDP MP Charlie Angus tweeted: “Poor Bryan Adams. The biggest pandemic in a century, a disease that has taken the lives of so many good people, has messed with his gig. And he is cranky. Grow up you multi-millionaire idjit.”

The description on Adams’ Wikipedia page was briefly edited to include the word “racist” but that was later removed.

Adams released his debut album in 1980 and has sold 65 million records worldwide.

I have to admit that I never thought I’d be saying the words “Bryan Adams is a racist conspiracy theorist”, but these these times are showing some people for who they really are.

I won’t be listening to his music anymore.

Your xenophobia cuts like a knife. Do better dude.

As a vegan, I just wanna say we don’t claim @bryanadams and his xenophobia, or anyone that’s cool with what he said.