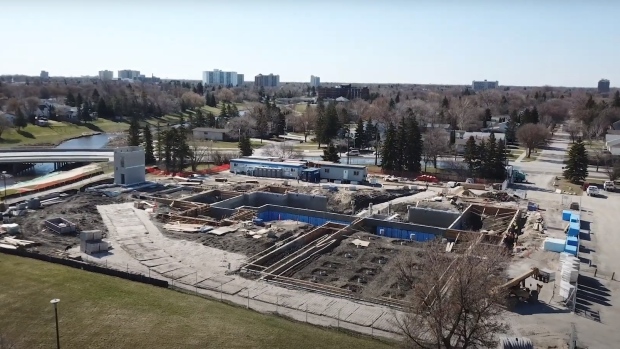 WINNIPEG — As construction for the Bruce Oake Recovery Centre continues, the province has given a $3.5 million grant towards the capital construction costs.

On Monday, Health Seniors and Active Living Minister Cameron Friesen, along with Scott and Anne Oake, announced the multi-million dollar investment in the centre which is scheduled to open in the spring of 2021.

“Obviously, we still grieve, but today we have joy in our hearts because we can report to you that as we speak, the Bruce Oake Recovery Centre is becoming a reality,” said Scott Oake, the father of Bruce Oake.

Scott said this centre is a way to remember Bruce and help save the lives of others struggling with addictions.

“A continuum of care and addiction recovery at no cost – those are the cornerstones of the Bruce Oake Recovery Centre.”

“I just give thanks for this wonderful family who has allowed a tragedy in their own lives to compel them and propel them on to make a difference to help others,” Friesen said.

Construction on the centre began in January. Scott said this money from the province will ensure that construction continues uninterrupted.