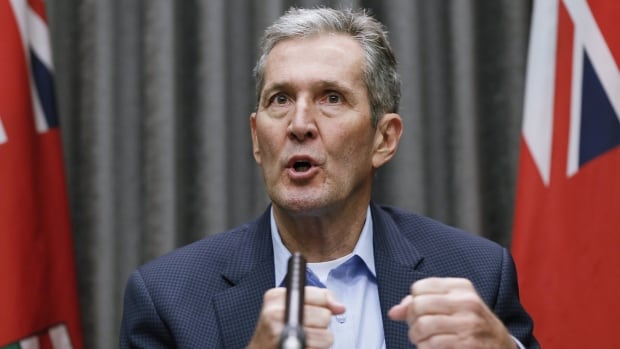 Manitoba is looking at the need for more widespread testing for COVID-19 before eventually reopening the provincial economy, Premier Brian Pallister said Thursday.

Reopening Manitoba’s economy is “vital,” Pallister told reporters during a briefing on updated COVID-19 measures, and conversations about increased testing are ongoing.

“We know that through increased testing there is an increased possibility that we’ll be able to build confidence — not only in the general public, but in the health officials whose guidance we must listen to — that we are not opening the door to a resurgence in COVID infections in our province,” he said.

“That testing is an important aspect of what you’re talking about.”

The premier made the remarks Thursday after being asked to respond to Prime Minister Justin Trudeau’s comments Wednesday that widespread testing and contact tracing will be crucial in reopening the larger Canadian economy.

“It’s a fair point, and I think the prime minister makes a good point,” Pallister said Thursday. “[Alberta] Premier [Jason] Kenney has also looked at adding to the testing capabilities in the province of Alberta.”

Manitoba Premier Brian responded to a reporter’s question during a Thursday news briefing on COVID-19 measures in the province. 1:00

So far, Manitoba has only offered testing to symptomatic people in certain higher-risk categories, including health-care workers, recent travellers and known contacts of those with COVID-19. People from remote communities, long-term care centres, jails and shelters also are being tested, as well as patients hospitalized for respiratory symptoms.

“To this point in time, of course … we’ve been focused, naturally, on doing all the preventative testing and diagnosis that we can, to fuel our capacity to assist those who are suffering from COVID directy. And we’ve been, I think, quite successful in doing so,” Pallister said.

“To be frank, though, the opening of our economy is vital, and so this is an issue of importance and discussion that we’re undertaking right now.”

It’s been more than a month since the first case of COVID-19 was confirmed in Manitoba. The province now has 246 confirmed or probable cases of the disease caused by the new coronavirus, and five people in the province have died.

The news conference was called Thursday to announce the official launch of a previously announced online therapy program to support Manitobans during the COVID-19 pandemic.

The province announced the program would be coming nearly three weeks ago. More than 800 people have pre-registered for the program, Pallister said, including nearly 600 people who are already getting help.

On Thursday, Pallister acknowledged the emotional toll brought on by the pandemic and measures to slow its spread. He mentioned specifically the need for many Manitobans to stay away from extended family members and questions about when a vaccine will come.

“I think the emotion around the uncertainty of this thing is probably one of the things that is adding to the stress levels for many Manitobans, and I understand that,” Pallister said.

The online therapy tool is guided by professional therapists, the province said.

It addresses mild to moderate anxiety symptoms related to some of the challenges brought on by the pandemic, ranging from uncertainty and stress management to physical isolation and information overload.

It’s available to all Manitobans 16 or older, and you don’t need a doctor’s referral to get in. People who want to participate can register online, and then they’ll be asked to download an app and complete a questionnaire.

After that, a therapist will reach out within three days for an initial assessment over the phone, the province said.

From there, people complete 10 modules on the app, with monitoring and scheduled check-ins from the therapist.

Updates on other programs

Pallister also gave updates on the status of a handful of other previously announced initiatives to help tackle COVID-19 in the province.

More than 6,300 people have signed up to help other Manitobans through the Help Next Door MB online tool, Pallister said. The province partnered with Winnipeg-based North Forge Technology Exchange to build the tool, which connects volunteers with people who need help.

The premier added that 88 per cent of child-care requests from Manitoba critical workers have been filled.