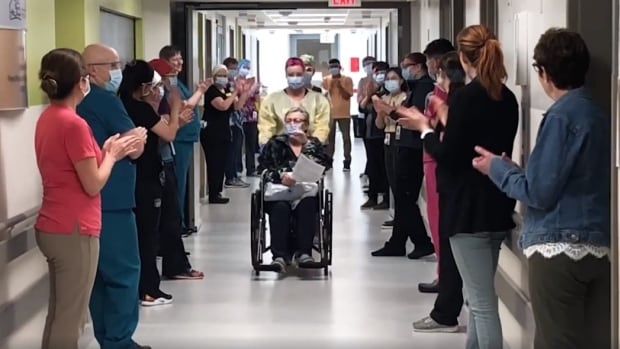 Hospital staff have seen their share of stress, anxiety and heartbreak during the COVID-19 pandemic, but last week the Brandon Regional Health Centre was the scene of cheers, applause and a lot of music.

Staff cranked up the song Here Comes the Sun and lined the hallway to say goodbye to Wendy Russell, who was discharged from the southwestern Manitoba hospital after 17 days of being treated for the life-threatening illness caused by the novel coronavirus.

The retired Manitoba telephone operator began to feel sick around the end of April — cold and tired, with a heavy feeling in her chest, she said.

The thought of coronavirus didn’t even enter her mind as a possibility.

“No way, no — never thought of it in a million years,” Russell said.

Brandon Regional Health Centre celebrated with staff lining the hallway to say goodbye to our patient who after 17 days in the hospital due to COVID-19, was able to go home. We wish her all the best and thank our staff for the great care they provided. <a href=”https://t.co/93CmeB5lro”>pic.twitter.com/93CmeB5lro</a>

Finally, she asked her cousin to drive her to the doctor. But when her cousin arrived, she took one look at Russell and called for an ambulance.

She doesn’t remember a thing about the ambulance ride to the hospital.

Her next memory is being in a bed in the emergency ward, surrounded by doctors and nurses. Russell wasn’t breathing properly so she was placed on oxygen to help, but didn’t require a ventilator.

But the attentive staff made it much easier to be there, and away from family who were not allowed to visit, Russell said.

Any time she pushed the call button they were there in seconds, she said, adding she grew very close to them.

At the same time “it feels really good” to be back home, Russell said.

She’s still tired and has been told it’ll take two to three weeks to finally feel enough energy to want to do something.

In the meantime, she’s enjoying the sun on her deck but desperately missing seeing her grandkids.

“If I could get them here, I’d be better. But we’re kind of just keeping them apart [from me] for now,” she said.

Russell doesn’t know where she may have picked up the virus in the first place.

“I was here at home, then I was in there,” she said. “I thought I had self-isolated for a long time, but I guess I didn’t do it enough. I don’t know.”

When she sees images of people disobeying health orders and gathering in groups without safe distancing, Russell shakes her head.

“You need to isolate and do as you’re told. This is your life, and this is everybody around you’s life,” she said, adding she is “seeing everything in a different light now.”

“The whole world has changed.”