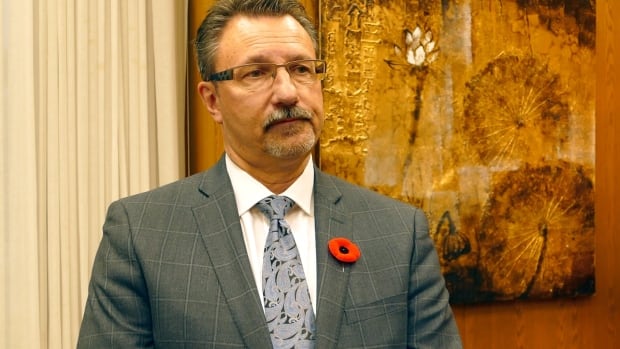 The City of Brandon’s director of emergency preparedness delivered a message to anyone in the southwestern Manitoba city who thought the worst of the COVID-19 pandemic had passed.

“COVID-19 is like the brother-in-law that you owe money to. He’s not going anywhere,” Brian Kayes said in a live streamed video message posted on the City of Brandon YouTube page on Monday.

Kayes and Brandon Mayor Rick Chrest revived their online community message for the first time in weeks, as the city grapples with a cluster of cases that on Monday had grown to 64 people.

Twenty-two employees at the Maple Leaf Foods pork processing plant in Brandon have tested positive for the disease caused by the new coronavirus. The union representing workers at the plant have called for it to shut down for at least a week until all tests are in.

On Monday, Chrest praised the company’s efforts to prevent the spread of the virus within the plant.

“Maple Leaf itself has gone above and beyond to keep that plant and their employees safe,” he said.

So far, public health officials have said there is no evidence the virus is being transmitted inside the facility.

Before Manitoba’s streak of no new cases ended on July 14, Brandon had gone about 70 days without a new case, Chrest said. Since then, there have been nearly 100 new cases in the Prairie Mountain health region.

Kayes suggested some people in the city may have become less strict about following public health guidelines during that long stretch without any new cases.

“COVID-19 is a patient thing. It will wait you out, it will be here ready for that time when you let your guard down,” he said.

Residents in the city “need to refocus their attention” on fighting COVID-19, Chrest said, urging people to follow the advice of officials like Dr. Brent Roussin, including frequently washing hands and keeping a minimum of two metres apart.

Roussin has advised the nearly 50,000 people — about 200 kilometres west of Winnipeg — to stay home as much as possible.

The mayor met with the city’s emergency operations team on Monday and he said they will continue to meet “until we believe the threat has subsided.”

Despite the recent surge in cases, the city is in a better position to fight the virus than when the first cases were reported in Manitoba in late March, Chrest said.

More is known about the virus, infrastructure is in place in businesses and public buildings to limit the spread and mitigation practices have been established.

The city’s only COVID-19 testing site has been overwhelmed by demand for tests and a second location won’t be open until Wednesday.

On Monday, officials with the Prairie Mountain health region asked people who aren’t experiencing symptoms, and who haven’t been told to get tested by a public health official, to stay away from the testing site.

Manitoba currently has 194 active cases of the virus — the highest at any point during the pandemic. There have been a total of 558 confirmed cases of COVID-19 in the province.