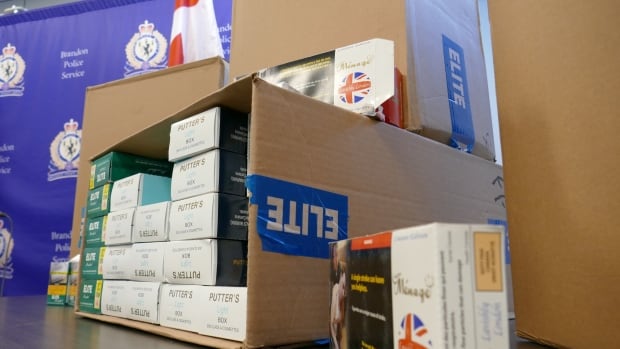 More charges have been laid after Brandon police found another half-million cigarettes and stolen property as the result of an investigation into a bust earlier this month.

Another 560,000 contraband cigarettes and a large quantity of power tools police believe were stolen in Brandon and the surrounding area were found and seized, police said in a news release Thursday.

The cigarettes and tools were found during the investigation into the previously reported discovery of more than 350 cases of illegal cigarettes — 173 found in a vehicle during a traffic stop in Brandon on Sept. 9, and 183 more found the next day when police searched a storage locker.

In all, more than 3.5 million illegal cigarettes were seized earlier this month; four men were arrested and face charges related to unmarked and unstamped tobacco.

Brandon police said two of the four suspects arrested now face additional charges of possession of property obtained by crime and numerous charges in relation to the contraband tobacco.

“The culmination of these investigations resulted in the seizure of over 4 million contraband cigarettes and approximately $50,000 worth of stolen property,” the news release said.

“Police believe stolen property was being exchanged for the purchase of contraband cigarettes.”

Some of the stolen property has been returned to the owners, but police said they are still looking for the owners of some of the items.