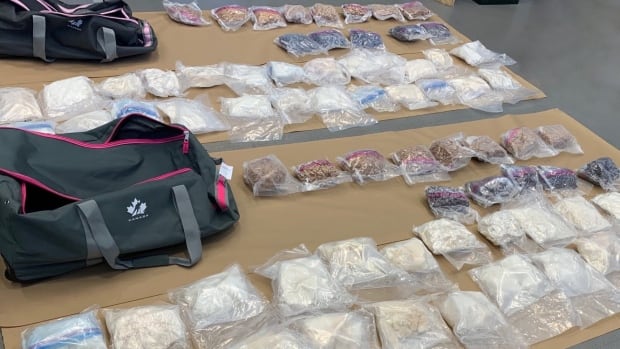 Police in Brandon say a traffic stop on the Trans-Canada highway led to what may be one of the largest — if not the largest — drug busts in Manitoba’s history.

A Brandon police officer made a traffic stop involving two men from Ontario on Tuesday afternoon, and spotted open liquor, the Brandon Police Service said in a Thursday news release. Investigating further, the officer found 76 kilograms of illegal drugs in the back of the vehicle, police say.

Combined, the wholesale value of the drugs is over $3 million if sold by the kilo — but the street value could be at least five times that, police said.

“I think it’s safe to say it’s our largest single seizure in history. It is a very large seizure.”

CBC News has contacted Manitoba RCMP to verify where this bust ranks in Manitoba’s history.

Although police are still testing the substances, they believe there are 50 kilograms of MDMA — commonly known as ecstasy — and 26 kilograms of various substances laced with fentanyl, all packaged in one-kilogram quantities.

“Illegal drugs of this nature are extremely dangerous to the users and our communities,” Brandon police said in the news release, adding that fentanyl-related deaths are still a serious health issue across Canada.

The two men, aged 41 and 43, appeared in court for a bail hearing on Wednesday and were later remanded into custody. They’ll be back in court at a later date for their trial.

Last December, RCMP called a meth bust the largest meth bust in the province’s history at that time, after 22 kilograms of meth and 43 kilograms of cocaine were seized. Combined, the drugs had an estimated value of $6.5 million.

Eleven people, including a member of the Hells Angels, were arrested on more than 60 charges in the December bust.