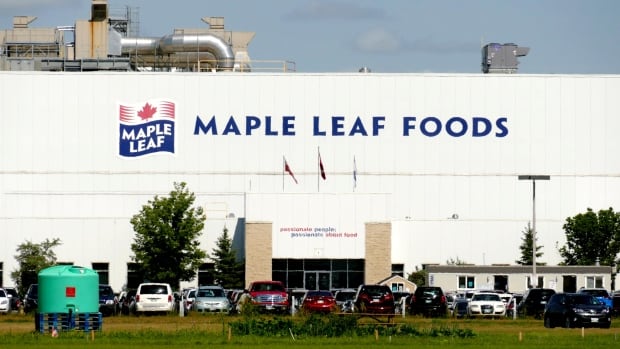 Dr. Brent Roussin announced 17 new COVID-19 cases in the province at a news conference on Friday afternoon, and confirmed eight cases involving workers at what he referred to as a business in Brandon.

Roussin did not name the business, but Maple Leaf Foods had previously confirmed eight cases at its pork processing plant in the city.

In total, 34 cases of COVID-19 have now been linked to a COVID-19 cluster in Brandon, Roussin said.

There are also six other cases in Brandon not linked to that cluster, he added, which shows that the infections are beginning to spread within the community.

“It’s not just in a couple households, you can tell that just by the sheer numbers that we have, and now that we’re seeing some spillover into probably community transmission in that area,” Roussin said.

United Food and Commercial Workers Union Local 832, along with Manitoba NDP Leader Wab Kinew and Manitoba Liberal Leader Dougald Lamont, have called for the Maple Leaf plant to temporarily close until at least Monday, to allow time for workers to get their test results and for the plant to be deep-cleaned.

Roussin said the plant received a deep clean since the last time the infected employees worked there.

On Thursday, Roussin said the Brandon cluster was linked to a person who travelled from eastern Canada and did not properly self-isolate upon returning. On Friday, however, he said it was unlikely health officials could pinpoint the source of the cluster.

“I don’t know if we could find the exact origin like that,” he said, when asked if the cluster began with some kind of gathering.

Earlier in the news conference, he said that at least some of the cases at the Maple Leaf plant were connected to the cluster, but he reiterated that all infections were acquired outside the workplace.

Earlier Friday, Premier Brian Pallister acknowledged the fears workers may have about coming to work at the plant.

Other meat processing plants across North America became hot spots for infections earlier in the pandemic, and Roussin said Manitoba has been able to learn from their experiences.

“Many of the measures that they had to institute then, we’ve had instituted for months now,” Roussin said, adding that’s likely why we haven’t seen transmission within the Maple Leaf plant.

Roussin also said a worker who tested positive at a Tim Hortons along the Trans-Canada Highway at 18th Street in Brandon worked during the infectious period, but not while symptomatic. That means the risk of transmission is low, Roussin said, but he advised those who may have been at the location to self-monitor for symptoms for 14 days, and get tested if symptoms develop.

A Tim Hortons spokesperson said on Thursday that the employee last worked at the restaurant on Aug. 2, and tested positive on Aug. 5.

Friday’s new cases in Manitoba include 10 in the Prairie Mountain Health region — which includes Brandon — five in the Winnipeg health region and two in the Southern Health region.

The new cases bring the provincial total to 491. Of those, 132 are active and 351 people have recovered from the illness. At the peak of the pandemic in early April, the highest number of active cases recorded in Manitoba was 163 on April 4.

Nine people are now in hospital, including three in intensive care.

Manitoba’s five-day rolling test positivity rate climbed to 1.1 per cent, from 0.9 per cent on Thursday. An additional 1,452 COVID-19 lab tests were done Thursday, bringing the total number of tests completed since early February to 96,999.

There have been eight deaths in Manitoba connected with COVID-19 since the start of the pandemic.

Heading into the weekend, Roussin said public health officials would release more detailed information about new cases than they have over recent weekends. He did not specify what information would be released this weekend, or in what form.

After a spike in cases over the August long weekend, many people criticized the province for only releasing the numbers of new cases via social media, without any of the details that are included in weekday COVID-19 bulletins, such as the health region where the cases are located.