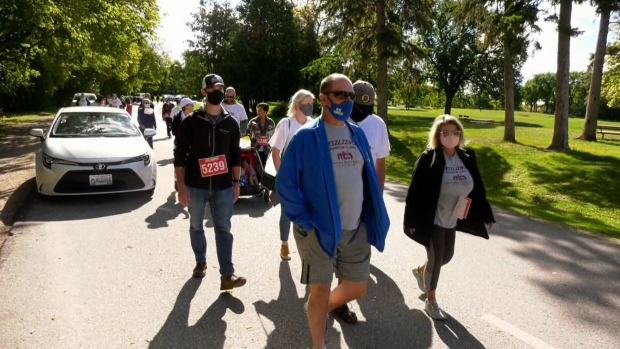 WINNIPEG — There are 3.1 Million people across Canada with brain injuries, and the Manitoba Brain Injury Association (MBIA) is the only provincial organization in the country.

Today was the 16th annual MBIA walk, a day where Manitobans can raise money for the organization.

Nicole Warkentin is participating in the walk for the first time. She decided to get involved after suffering a brain injury in 2019.

“In October, I actually had to get airlifted,” said Warkentin. “I had fractured my neck. I had a head injury. I broke my ribs. I punctured my lung. I fractured my tailbone, my hip.”

Warkentin said she was in the hospital for four months, and during her stay, the MBIA came to visit her.

“It was just such an encouragement to me that there was actually an association that would understand what I need,” she sad.

MBIA offers help to individuals and families living with the effects of brain injury.

It promotes independent living and a sense of community among those affected.

Fred Dougdale has been involved with the organization for almost a decade after sustaining a brain injury in a car accident.

He’s served on the board of directors and participated in the walk for the past several years.

Gladys Hrabi, executive director of MBIA, said the organization had to make some adjustments due to COVID-19.

This year MBIA had virtual participation for people who couldn’t attend, all participants had to sign a waiver and wear a mask, and temperatures were taken before the walk started.

She said this is MBIA’s biggest fundraiser of the year.

“This will really go towards direct services to support brain injury survivors, in terms of support groups, advocacy, and education and outreach,” said Hrabi.

Money is being raised through sponsorship, and people can also donate on the MBIA website.

Warkentin hopes to be an encouragement for other brain injury survivors.

“To show that when you push hard and you put the work in, healing happens,” she said.