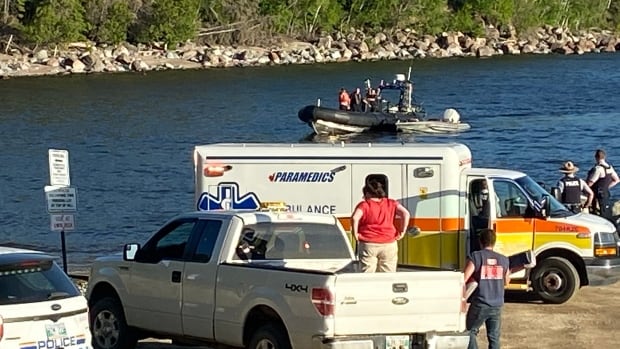 A search for missing boaters is underway Saturday after a boat capsized on the massive Lake Winnipeg near Bélair, Man.

A spokesperson for STARS Air Ambulance confirmed multiple people were onboard the watercraft when it flipped in the area off the east shore of the lake’s south basin.

A CBC reporter on the scene says a boat has been recovered and a body has been loaded onto an ambulance.

Fatima Khawaja says the air emergency crew landed and assessed the scene but did not transport any people from the area.

In an email, RCMP Cpl. Julie Courchaine said a witness on the shore saw an overturned boat and people in the water. Police responded to the call shortly after 4:30 p.m. on Saturday.

RCMP and other first responders and partners are on the scene now, police said.

It is unclear how many people were on the boat and if others are still missing.

Police on the scene declined to speak. Courchaine said RCMP will have more information to release on Sunday.

The community of Bélair is located 91 kilometres northeast of Winnipeg in the rural municipality of Alexander.