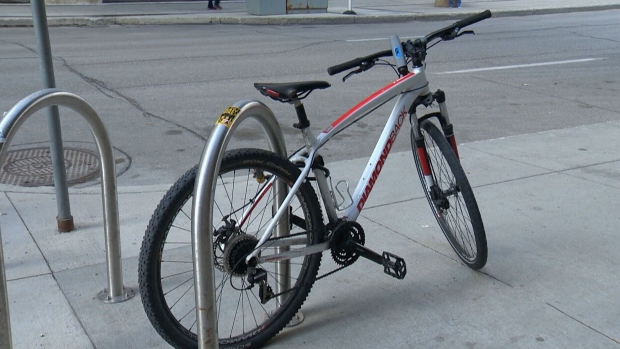 WINNIPEG — The COVID-19 pandemic brought a boost to bike sales in Winnipeg, but according to Winnipeg Police Service (WPS) bike theft is going down.

Winnipeg police data shows 2020 had some of the lowest bike theft numbers in years.

March and April saw it’s the lowest number of bike theft since 2014, and the month of May saw the lowest since 2015.

This comes as welcome news for cyclists in Winnipeg like Jen Botincan.

She works from home due to COVID-19, but when she was working in her office she’d get there on her bike.

“I took my bike to work pretty much every single day in the summer,” Said Botincan. “Now I get out about three times a week.”

Botincan said when it comes to bike theft, she doesn’t take any chances. She said she keeps her bike in her apartment and rarely locks it up outside.

“Even when I’m at The Forks I bring my bike to a table, and I have a chain lock plus a U-lock that I use as well.”

When bike theft first spiked in the city – WPS implemented programs to build awareness and education around bike theft, including the bike registry system.

“People who are selling bikes on Kijiji indicate…the serial number, you’re simply welcome to check it through the CPIC database to confirm it’s not stolen,” said Carver.

He believes the drop in bike thefts in April and May are a direct result of the COVID-19 Pandemic.

“(Winnipegger’s) are not commuting because they’re not going to work,” he said.

Winnipeg Police recommend you register your bike when you first purchase it and get two locks to make sure it’s locked up securely.

Botincan has registered her bike just in case it was stolen, but she said if you take precautions your bike is safe in Winnipeg.

“Be aware of your surroundings, and get out and have fun. I couldn’t imagine going through this right now without the ability to get outside and bike.”