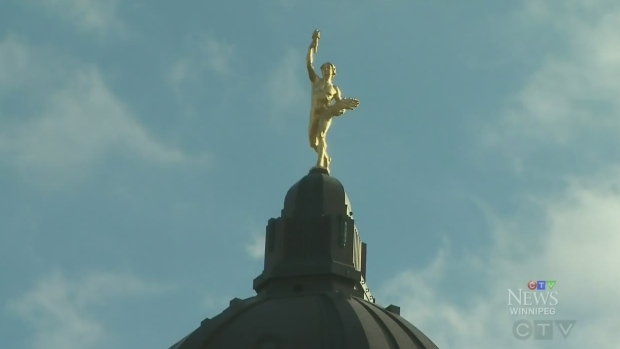 WINNIPEG — After having the budget announcement blocked by the NDP last week, the province has now tabled the 2020 budget.

It prepares for looming financial storm clouds over COVID-19, while following through with most of its promised tax cuts.

With COVID-19 impacting the world economy, the province is preparing for any unforeseen emergencies, as it is topping up the Rainy Day Fund.

The Conservatives added $300 million to the fund to bring the total to $872 million.

An emergency contingency fund for natural disasters, like flooding and forest fires, is doubling from $50 million to $100 million.

There is also a smaller investment of $5.7 million to deal with smaller-scale floods or other emergency events.

“We anticipate that the costs of COVID-19 will exceed that amount, and will ensure the necessary resources are made available to respond to the current situation,” The document said.

The province is also predicting lower than expected revenues.

”COVID-19 will impact Manitoba’s forecasted budgetary revenues. The revenue outlook included in Budget 2020 was based on reasonable, consensus-based assumptions about the pace of growth in the province’s economy. This is no longer the case,” the document reads.

“Given the sudden escalation in economic, social and financial developments caused by the spread of COVID-19 throughout Canada, it is impossible to identify a consensus view among forecasters relied upon by Manitoba Finance.”

Last week Finance Minister Scott Fielding said the deficit has been reduced to $220 million, which, compared to last year is an improvement of $140 million, when the deficit was $360 million.

Fielding said the government is now within “striking distance” of eliminating the shortfall.

As the government had previously announced a green levy, also known as a carbon tax will be put in place at $25 per tonne on July 1, 2020.

It is also spending $101 million for the Lake Manitoba and Lake St. Martin Outlet Channels Project.

There is also a one-time $45 million capital investment for climate “resiliency” projects.

Funding for the city’s first phase of the north end sewage treatment plant upgrades will be increased by $21.8 million to $56.2 million. Fielding said that completes the government’s obligations for phase one. The entire project is estimated to cost $1.8 billion.

There is also an additional $15.8 million that will assist municipalities outside of Winnipeg with developing safe and sustainable water and sewage facilities.

The province said health spending is estimated at $6.82 billion, but could increase because of the pandemic.

The health budget includes $1.8 billion for the Health Sciences Centre master campus plan, which is projected to cost $592 million, and the redevelopment of the Saint Boniface Hospital that has a price tag of $88.5 million.

The province is also investing more than $250 million through the Provincial Clinical and Preventative Services Plan, for rural and northern healthcare, digital health supports and infrastructure investment in projects and program delivery.

The province is promising 13 more new schools over the next decade.

These projects will result in 4,425 new classrooms that will be open or under construction by the end of the fiscal year.

There is also $5 million to implement recommendations from the K to 12 review, and a $2.4 million increase for curriculum development funding.

The budget features $2.1 billion for the Families Department. Part of that will see an increase in funding for Community Living and disABILITY Services to $21.2 million.

It appears the province is getting out of ownership of social housing.

There is a funding increase of $10 million for the Manitoba Housing and Renewal Corporation, but the province said over the next five years the corporation will change from a housing “provider” to a “funder” and “regulator”.

The conservatives said this is being done to make social housing more sustainable.

The policing budget will see an extra $6 million for provincial police service agreements, including funding for an additional 27 officers.

There is also a $3.7 million increase that will be directed toward addressing crime and gang activity and a $2.3 million investment for public safety.

The province is also helping police officers “detect and deter drug-impaired driving” by including $1 million.

The province said this is the next step to boost the budget to $400 million.

The government is also investing $313 million into local governments through the Strategic Municipal Investment Fund, and some of that money, $3.8 million, will go towards projects in northern Manitoba.