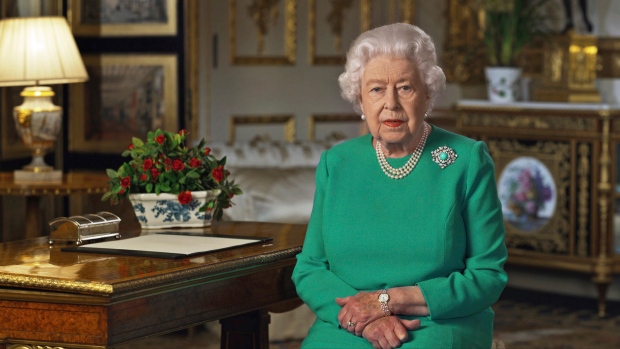 TORONTO — The Queen said the United Kingdom will succeed in its fight against the novel coronavirus, as she offered a message of hope to the rest of the Commonwealth and the world in a rare televised address.

“I hope in the years to come everyone will be able to take pride in how they responded to this challenge,” the monarch said in the pre-recorded segment that aired Sunday. “Those who come after us will say that the Britons of this generation were as strong as any.”

She expressed hope that history will find that “the attributes of self-discipline, of quiet, good-humoured resolve, and of fellow feeling still characterize this country.”

The Queen also thanked health-care professionals and other essential workers, as well as those who are following physical distancing rules and staying at home.

She said that while self-isolating may be difficult right now, it presents “an opportunity to slow down, pause and reflect in prayer or meditation.”

“We know deep down that it is the right thing to do,” she said.

While the Queen delivers a special televised speech every Christmas, other such broadcasts are less common, typically reserved for wars and major deaths in the Royal Family.

Health officials have recorded more than 65,000 deaths globally related to COVID-19. Nearly 5,000 people have died in the United Kingdom as of Sunday afternoon.

Sunday’s address was filmed in Windsor Castle’s White Drawing Room, a location specifically chosen as it would allow for enough space between the camera person and the monarch.

The spread of the novel coronavirus, which the World Health Organization declared a pandemic on March 11, has resulted in widespread cancellations and restrictions on movement. In March, Buckingham Palace said the 93-year-old monarch would be postponing scheduled engagements because of the virus. Later that month, U.K. Prime Minister Boris Johnson and the Queen’s son Prince Charles tested positive for COVID-19. Charles was out of self-isolation and reportedly healthy by April.

In a video posted online, the Prince of Wales said his symptoms of the disease were “relatively mild.”

“At such an unprecedented and anxious time in all our lives, my wife and I are thinking particularly of all those who have lost their loved ones in such very difficult and abnormal circumstances, and of those having to endure sickness, isolation and loneliness,” he said.

With files from Sonja Puzic