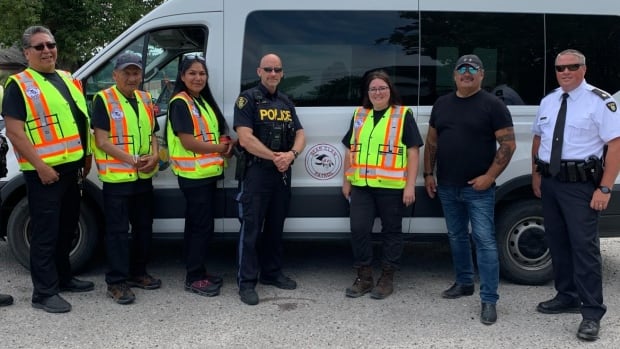 Kenora’s Bear Clan Patrol hit the city’s streets on Friday after getting $1.2 million in funding as part of a year-long pilot project to get the community safety group off the ground.

“It’s amazing,” said Daryl Redsky, a founding member of the group’s Kenora chapter. “This money is going to put feet in the boots to hit the ground, and we’ve got about 10 boots to fill.”

The money from the Ontario government, which gave $800,000, and the Kenora District Services Board, which gave $400,000, will help the Indigenous-led group patrol the city’s streets and public spaces 24/7, said Kenora-Rainy River MPP Greg Rickford in a news release on Friday.

“Today’s investment is a direct response to the ongoing crisis in Kenora’s downtown,” said Rickford.

Patrollers will wear high-visibility vests and walk through Kenora’s downtown core areas. The team will also have access to a mobile support worker with a vehicle to respond to calls, drive people to hospital or other places and bring needed items, the release said.

Redsky said he hopes the pilot project delivers positive results so the group can expand into surrounding communities.

“We’ll be out there to assist our homeless, the vulnerable and also the community in general,” Redsky said, adding that the group will be able to check on people in distress and offer to take them to a detoxification centre if needed.

“Once it meets people’s expectations, our hope is that we will continue to be a program that’s going to be funded for a long time.”

The most recent iteration of the Bear Clan Patrol started in Winnipeg in 2015, following the death of 15-year-old Tina Fontaine. The Kenora chapter started in 2016 — after 16-year-old Delaine Copenace’s body was found in the Lake of the Woods — but didn’t have the resources to run consistently until now, Redsky said.

James Favel, executive director and founder of the Winnipeg group, helped train members of the Kenora chapter. He said the money will go a long way in supporting vulnerable people in the Kenora area — and wants to also secure core funding for the Winnipeg chapter.

“This is what I was hoping that we could accomplish here in Winnipeg, and I’m still hoping that we will,” he said. “We’ve been doing the work for six years and we’re still cobbling together little grants here and there.”

Redsky said he hopes the Kenora chapter will be able to hire people who have experienced homelessness to lead their group, as a way to give opportunities to vulnerable people by helping them find employment and to inspire youth.

“We will have individuals that will have gone through the lived experience and that have turned their lives around,” he said. “We need those kind of role models for our young people and someone that they can look up to.”

The pilot project will run until the end of July 2021, the release said.