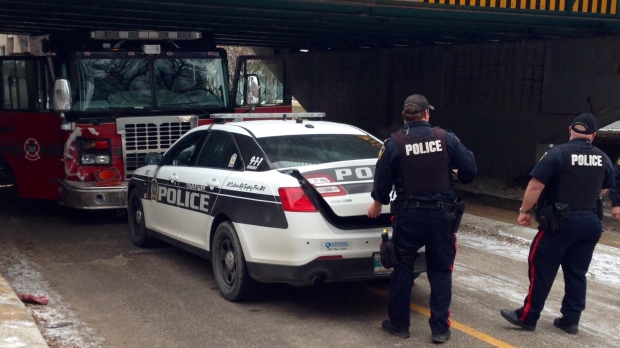 WINNIPEG — A man accused of stealing a Winnipeg fire truck and taking it on a joy ride through downtown has been granted bail with strict conditions.

Bai Farama Koroma of Winnipeg was granted bail in Manitoba’s Court of Queen’s Bench Thursday afternoon, and will be under the care of the Behaviour Health Foundation.

Police were called after a fire truck was stolen on the afternoon of November 29, 2019, while firefighters were responding to a call in the 1600 block of Henderson Highway. Police said the truck travelled south down Henderson Highway with the lights flashing and sounding the horn.

The fire truck collided with a half-ton truck that tried to pull over, damaging a power pole and causing a power outage.

Police said the truck reached speeds of up to 70 km/h while travelling through downtown. The truck went through Central Park, sending pedestrians running. Police said the truck also drove against traffic, ran multiple red lights and damaged a wall and traffic bollard near Portage Place. The fire truck was stopped at Assiniboine Avenue and Carlton Street, where police took a driver into custody.

Koroma was charged with:

– Dangerous operation of a conveyance;

– Operation of a conveyance while impaired by BAC or drug;

– Possession of a weapon;

– Flight while being pursued by a peace officer;

– Two counts of failing to stop at the scene of an accident; and

– Driving without a valid licence (HTA).

During the investigation, it was also revealed Koroma was released on a promise to appear on a charge of domestic assault causing bodily harm. He was arrested on October 26 and was scheduled to appear in court on December 10, 2019, to face the charge.

None of the charges against Koroma have been proven in court.

While on bail, Koroma must follow strict conditions. He must obey a curfew and abstain from alcohol or drugs, unless prescribed.

He cannot be in the driver’s seat or operate a motor vehicle while on bail.

His next court date is set for May 11.