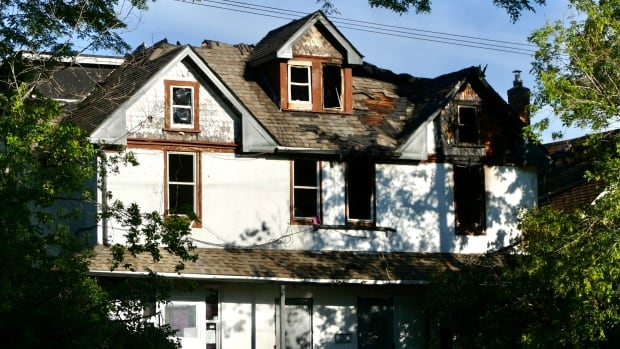 A Winnipeg house fire sent two people to hospital, including one firefighter, and forced the evacuation of nearby homes Monday morning.

Firefighters responded to the blaze in a two-storey home on Austin Street North near Euclid Avenue. When they arrived, they found the house engulfed in heavy flames and smoke billowing out of the windows.

Deteriorating conditions forced them to switch from an offensive attack to a defensive approach to combating the fire, the Winnipeg Fire Paramedic Service said in a news release.

Crews used aerial ladders and an exterior attack, using a drone to monitor the situation.

Neighbours in surrounding homes were evacuated as a precaution.

Paramedics assessed two people at the scene and took one to hospital. A firefighter was also injured and taken to hospital in stable condition.

The cause of the fire is under investigation. Police were on scene investigating around 8 a.m. Monday morning.

No damage estimate was available, but the house sustained heavy fire, smoke and water damage.

On Saturday evening, firefighters responded to a separate fire, caused by the improper disposal of barbecue charcoals.

Crews were called to a house on Dalemore Lane near Colebrook Drive around 8:05 p.m.

They found heavy flames and smoke coming from the home, but got the fire under control within about half an hour.

No one was injured.