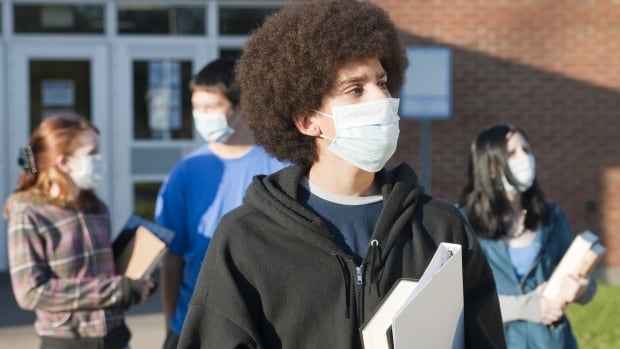 The Manitoba government is still considering whether masks should be required at schools, after Canada’s chief public health officer recommended masks for older children and two provinces announced plans to make them mandatory at higher grades.

Alberta’s back-to-school plan, announced Tuesday, will make wearing masks mandatory for all staff as well as students in Grades 4 through 12.

Ontario announced the same mask provisions for staff and students, while Nova Scotia has mandated masks at all indoor public spaces, including common areas at schools.

Masks recommended for kids 10 and older

Tam said the Public Health Agency of Canada will be publishing detailed guidelines later this week which include a recommendation that children over the age of 10 be required to wear masks at school.

“Non-medical masks plays a role in reducing transmission of COVID-19 in a school environment,” she said. “Wearing these masks is an additional personal layer of protection.”

Tam said experts are still learning about the role children play in the transmission of COVID-19, but masks are one of many tools that can be used to prevent the spread.

“More and more is now known that in fact older children, over the age of 10, transmits as well as an adult,” said Tam. “Younger kids, even if they transmit at a lower likelihood, they still can transmit.”

She expects recommendations to evolve as transmission at schools and among different age groups is better understood.

Last week, Manitoba’s education minister unveiled the province’s school reopening plans, which did not include a recommendation for students or staff to wear masks.

When asked on Tuesday if Manitoba is considering making masks compulsory for the bulk of students and staff like Alberta and Ontario, Friesen said all options are being considered.

He said Dr. Brent Roussin, Manitoba’s chief public health officer, is in regular, frequent contact with his federal counterparts and the province’s back to school plans are subject to change before classes are slated to resume on Sept. 8.

“We know that there are some provinces at this time saying that they will proceed with masks in September, other provinces that have said they aren’t there yet,” he said. “Certainly many things are on the the table.”

Jason Kindrachuk, an assistant professor and Canada Research Chair in emerging viruses at the University of Manitoba, said the discrepancy between federal and provincial advice likely comes down to Manitoba’s uniquely low case burden, compared to neighbouring regions.

“I think the difference in recommendations as far as masks for kids, relates quite strongly back to the low amount of community transmission of this virus that we’ve seen,” he said.

But Kindrachuk cautions if there is anything experts have learned about COVID-19, it’s that the virus is unpredictable, especially as it relates to kids.

“In fact, there is recent data suggesting that in young kids, in essentially zero to five, the numbers or the amount of virus in the respiratory track seems to be actually higher than what we see in adults,” he said. “The problem for us is that we don’t know how this relates to being able to transmit that virus.”

Kindrachuk said he applauds Tam’s recommendations, but there will probably continue to be discrepancies between federal guidance and regional public health recommendations based on community transmission.

As of Tuesday afternoon, there were 94 active cases of COVID-19 in Manitoba, with 341 people recovered and eight deaths.