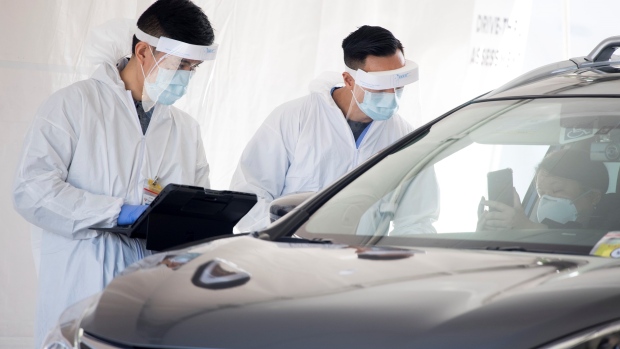 TORONTO — As health officials indicate the next phase of containing COVID-19 includes a dramatic expansion of testing for the virus, many Canadians still have trouble accessing the tests.

Dr. Camille Lemieux, chief of family medicine at the University Health Network in Toronto, said increased testing is needed to prevent a second wave of COVID-19, especially as governments across the country began to ease restrictions.

“As we open up, that’s when we have those embers that are still burning in the community,” she told CTV News. “We need to find them or they’re going to turn into the fire again and we are going to be back to square one.”

“Testing regularly and frequently grocery store clerks and taxi drivers, for example,” she said. “They have a lot of occupational exposure to people.”

On Tuesday, Canada’s Chief Public Health Officer Dr. Theresa Tam said an average of between 26,000 and 28,000 Canadians are being tested for COVID-19 each day, far short of the 60,000 national goal.

She added that health officials must expand who can be considered for a test in order to stop a second wave.

In Ontario and Quebec, the two hardest-hit provinces in Canada, testing is still falling well below expectations.

Ontario Premier Doug Ford said Tuesday that the province has established a new goal of 20,000 COVID-19 tests per day, up from 16,000.

According to numbers from the Ministry of Health, the province processed 19,227 testing samples on Saturday, a new high, but processed just 11,957 on Monday.

Some Canadians are still being refused at the door. Hannah Abrahamse, a student from Ontario who had been studying in England, was refused testing twice after she returned to Canada and was exhibiting symptoms.

“I was told I did not meet criteria even though I’d travelled,” she told CTV News.

On her third try, Abrahamse finally received a test and it turned out to be positive. She ended up staying in isolation for 40 days to protect her immunocompromised family.

In Quebec, Kristy-Lyn Kemp, a nurse working in a hot zone, had to lie about her symptoms in order to receive a test for COVID-19, which also turned out to be positive.

“I got off the phone and I almost threw up,” she said. “I couldn’t believe it.”

The City of Montreal, the hardest-hit city in Canada, announced on Tuesday that is ramping up testing, with a goal of achieving 3,000 tests per day through traditional measures and newly formed mobile testing units.