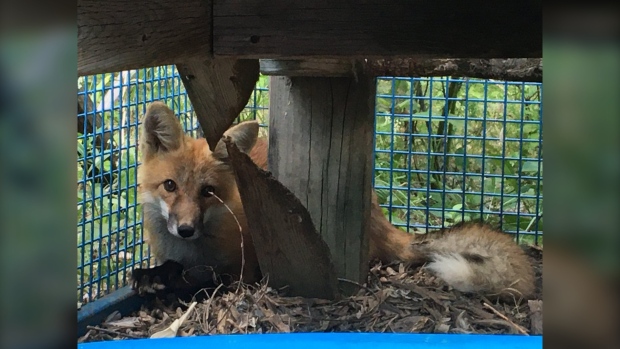 WINNIPEG — A Manitoba animal rescue has released a red fox, which it believes was kept as someone’s pet, back into the wild.

Lisa Tretiak, president and co-founder of the rehabilitation centre, said this behaviour is a sign that humans cared for and fed the animal.

“This fox was unfortunately quite used to humans,” Tretiak said.

“So someone would have raised it sometime in the early spring and then released it at Oak Hammock Marsh, where it was running up to people.”

Tretiak said there are many reasons the public should not try to rehabilitate and raise wildlife, saying animals need a special diet to mature properly, and that animals need to be afraid of humans.

“Our goal is either to have other siblings with it that we can either put together or we actually ghost-up, where they don’t actually recognize us as humans and that we can continue feeding them so they have this fear of humans,” she said.

Tretiak explained if animals aren’t scared of people, they will run up to humans and possibly hurt or bite them.

“This is why it’s really important that it comes to rehab centre so that we can ensure that it’s raised properly,” she said.

She added that not only was this red fox not afraid of humans, but it also didn’t know how to hunt, which is important as the animal needs to know how to fend for itself.

The rehabilitation centre paired the red fox with another fox in its care and prepared them to enter the wild.

“Now the two of them will be able to look after each other once they’re in this large area,” she said, noting they were released into 80 acres of field and wooded area.

Tretiak said this year, the rehabilitation centre has seen quite a few animals that seem to be accustomed to humans.

“We are wondering if COVID has caused people to try to do this at home with nothing else to do during that time,” she said.

If anyone comes across any wildlife in need of help, they should contact the Prairie Wildlife Rehabilitation Centre.