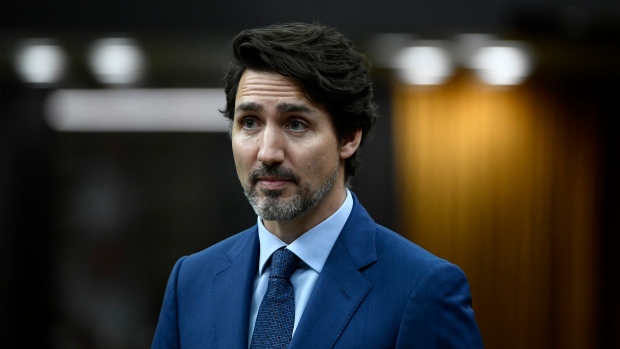 OTTAWA — The House of Commons has passed Bill C-14, the second piece of emergency legislation of the COVID-19 pandemic, and now it’s before the Senate for a second round of scrutiny before allowing the $73-billion wage subsidy program to be enacted.

After days of talks between the government and opposition parties about the contents of the bill and more broadly how the House of Commons functions during a crisis, an agreement was struck late Friday night to grant the minority Liberals the backing needed to fast-track the bill through the House of Commons.

The House of Commons began its emergency sitting at 12:15 p.m. EST, where Prime Minister Justin Trudeau delivered his daily address, which until Saturday has been occurring from his driveway.

During his address, Trudeau called COVID-19 the greatest challenge of a generation and drew parallels to past wartime efforts of parliamentarians, his grandfather included.

“But Mr. Speaker, this is not a war. That doesn’t make this fight any less destructive, any less dangerous. But there is no front line marked with barbed wire, no soldiers to be deployed across the ocean, no enemy combatants to defeat. Instead, the front line is everywhere: in our homes, in our hospitals and care centers, in our grocery stores and pharmacies, at our truck stops and gas stations. And the people who work in these places are our modern-day heroes,” Trudeau said.

“As Canada confronts this crisis, we are all called to serve. To fight for and alongside each of our fellow citizens, to fight for someone’s mother, someone’s grandfather, someone’s neighbor… Without reservation, without pause, we must fight for every inch of ground against this disease. We must be there for each other as we spare no effort to safeguard our collective future,” the prime minister said.

The leaders of the other parties then responded to Trudeau’s address, and the House then entered what’s called a “committee of the whole,” where the bill was debated and fast-tracked through all legislative stages. The prime minister and members of his cabinet also took questions from opposition MPs on their response to the pandemic.

The Senate convened at 4 p.m. EST and has been questioning Finance Minister Bill Morneau on the latest aid measures. It is expected the legislation—titled “A second Act respecting certain measures in response to COVID-19”—will pass by day’s end.

During his response to Trudeau’s address, Outgoing Conservative Leader Andrew Scheer said that the spending measures being taken right now—which will receive additional scrutiny from the Auditor General of Canada—are projected to result in a more than $184-billion deficit in 2020-21 and so years of fiscal restraint will be needed going forward.

He said he was glad to reconvene and have the opportunity to question the government’s handling of the pandemic.

“Why did the government wait to so long to impose travel restrictions? Why were travellers not originally screened? Why do we have a critical shortage of medical supplies? … Why are other countries ahead of us when it comes to testing and tracing? These are some of the questions that Canadians have and they deserve answers,” Scheer said.

NDP Leader Jagmeet Singh used his address to draw attention to the segments of the population that have been impacted by the economic downturn that the public health measures in place have caused, but have fallen through the cracks.

“In the last month our world has changed dramatically,” he said, citing the more than one million jobs lost in March, and vowing to continue to push for further aid measures.

In French, Bloc Quebecois Leader Yves-Francois Blanchet said his thoughts were with all those across his province who are mourning the loss of a loved one, and the essential workers who are working long hours in uncertain conditions.

He said the legislation presented Saturday is an indication that sometimes more government intervention in Canadians’ lives can be a good thing.

Green Party Leader Elizabeth May spoke positively of the government’s openness to taking opposition MPs’ suggestions for improvements to their expansive plans to date and moreover the “social solidarity” she is seeing in the face of this crisis.

“I hope that can be a lasting lesson,” she said.

Ahead of the sitting, the leaders of the NDP, Bloc Quebecois, and Conservatives spoke about the negotiations that had been underway, and indicated they intended to support the legislation that that was tabled by Morneau after gaps identified have been rectified.

Scheer offered several examples of where the Tories called for tweaks to the billions of dollars in financial aid measures that have been unveiled in the last month to insure no one falls through the cracks.

Among what all sides have agreed to, both in the 15-page bill and through the unanimous consent motion to fast-track it:

“Not only will this give businesses more certainty, it’s also better policy,” Scheer said adding that it is evidence of why parliamentary oversight is required right now.

An initial 10 per cent subsidy was included in the $107-billion aid package passed during the first emergency sitting of the House that went overnight last month, but the government rolled out a massive expansion in the days following that needs to be legislated in order to come into effect.

The subsidy would be on 75 per cent of employees’ salaries, up to $847 a week per employee for 12 weeks, retroactive to March 15, for companies big and small as well as charities. Further tinkering to the eligibility was announced on Wednesday, with the intention of keeping as many Canadians employed despite the pandemic shutting down many aspects of society and the economy.

All sides had agreed there will be a limited number of MPs in the Chamber for the sitting to keep in line with physical distancing guidelines, with 14 Liberals, 11 Conservatives, three Bloc Quebecois, three NDP, and one Green. A similar limited roster will be present in the Senate.

During the sitting there was be no parliamentary pages, no food, and no beverages, to further limit potential spread of the respiratory virus between lawmakers.

VIRTUAL PARLIAMENT TO BE STUDIED

Talks about a virtual Parliament will continue past Saturday’s sitting—as the government wants to find a way for the Commons to convene digitally while the opposition has been eyeing more in-person sittings— but in the interim an agreement has been reached to see additional House of Commons committee hold virtual meetings, as the health and finance committees already have been doing.

He flagged the health and safety concerns the government has with a typical recall of the House, even with a limited number of MPs, such as having to bring back administration staff, interpreters, and security.

The Procedure and House Affairs Committee has been recalled with a specific task: Studying the way forward on virtual sittings, or possible temporary alternate locations or other technological solutions to allow members to fulfill their parliamentary duties while the Commons is suspended on account of the pandemic. It has until May 15 to report back with its findings.

House of Commons Speaker Anthony Rota has previously said he also has a team looking into the possibility for the House to hold virtual sittings within the next four weeks.

Scheer said his party views virtual sittings as something that could augment in-personal sittings, Singh said he is open to considering them, though Blanchet doesn’t think MPs need to take their seats in the Chamber to debate and pass policy.

Rodriguez said that Parliament needs to be able to continue its businesses, but will have to be done in a different way during this nationwide public health crisis. The prime minister has also spoken of the importance of allowing for MPs from all across the country be able to participate in the parliamentary process, and not just those close by, especially at a time like this.

“On one hand we can’t tell Canadians ‘stay home because that’s the way to fight this’ and then come here every day and meet,” Rodriguez said.