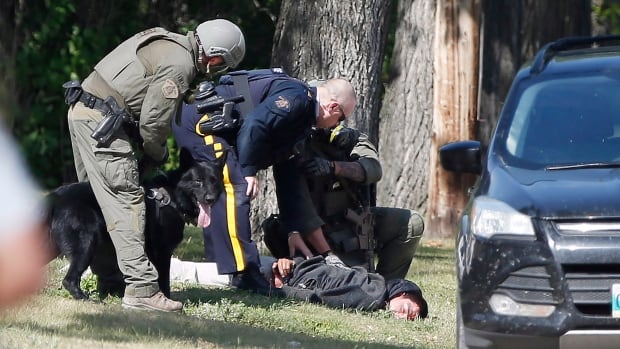 A man who was among four charged after an RCMP officer was shot near Onanole, Man., in August 2018 has been sentenced to 13 years behind bars.

He pleaded guilty last summer to two counts of aggravated assault on a police officer, one count of breaking and entering to steal firearms and one count of robbery.

Beaulieu was one of four men arrested after Cpl. Graeme Kingdon was shot and wounded as he and his partner responded to a break-in outside the small community, about 220 kilometres northwest of Winnipeg near Riding Mountain National Park, on the evening of Aug. 29, 2018.

Therae Racette-Beaulieu, the man who shot Kingdon, was sentenced last spring to 15 years in prison for the attempted murder of Kingdon and his partner, as well as another three years for the property crimes that took place before the shooting.

Kingdon suffered serious injuries as a result of the shooting.

Beaulieu, who is now 23, was arrested after an hours-long standoff in Neepawa, Man., the day after the shooting.

He has been in custody since his arrest. With time already served, he has about 10½ years left in his sentence, Bhanrath said

Two others men are awaiting sentencing for their roles in the crimes that happened before the shooting. They are expected to be sentenced later this year.