Home  »  News   »   A Winnipeg police officer lost a loaded ammunition magazine; have you seen it? 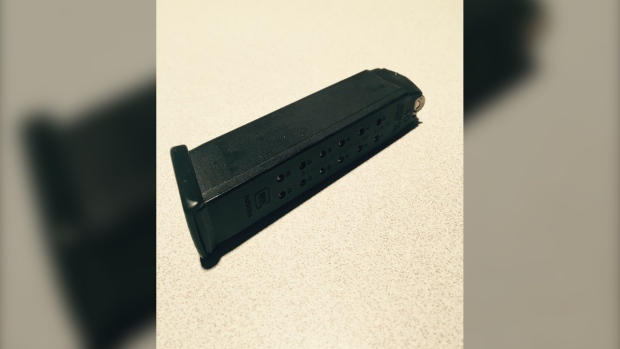 WINNIPEG — A Winnipeg police officer lost a loaded ammunition magazine somewhere in the city, and now police are asking the public to keep an eye out for it.

Police said on Wednesday, the officer’s extra magazine for their gun, which is stored on their belt, fell out during the course of their duties and was lost somewhere in the city. The magazine is black and contains 15 rounds.

Const. Rob Carver, of the Winnipeg Police Service, said it is not clear how the magazine fell out, or what area in the city it may be in.

“Our officers are out, affecting arrests which require sometimes a fair amount of physical interaction, jumping over fences, crawling through buildings and derelict buildings,” he said. “At some point, I guess the snap came out and it got dislodged.”

Carver said the magazines are stored on an officer’s belt with a snap-system, which allows for easy access to the magazine. He said officers losing magazines is not common, but it does happen every couple of years.

He said the lost magazine does not pose much of a safety risk.

“Really unless some kid were to put this thing in a fire, it’s really not dangerous. I mean they are bullets, which without a gun is really nothing,” he said, adding police are not worried about it being used in the illegal gun trade.

“Obtaining a Glock magazine is not a significant hurdle, it’s way easier than getting a Glock gun. And it is standard 40 calibre ammunition, which people can buy. Those two things are not controlled in the same tight manner as the actual firearm.”

Carver said about 15 to 20 years ago, the guns used by police had a magazine release that was designed only for right-handed shooters. He said this caused a problem for some left-handed officers, who found the magazine could be accidentally released and fall out of the gun.

Carver said since the Winnipeg Police Service no longer has this type of gun, and has since switched over to using guns that are ambidextrous. He said the lost magazine was an extra magazine stored on the officer’s belt.

He said if Winnipeggers come across the lost magazine, they can bring it to a police station or call police at 204-986-6222 and officers will come by to pick it up.