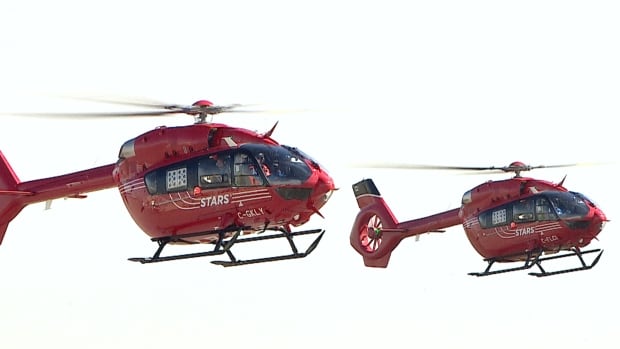 Westbound lanes of the Trans-Canada Highway near Austin, Man., have reopened, after a vehicle collision that sent a senior citizen to hospital forced them to shut down.

The man was in serious condition after being involved in a high-speed T-bone collision rollover on Highway 1, the spokesperson said.

The man was in stable condition when being airlifted to the Winnipeg Health Sciences Centre.

The crash forced the province to close a section of the westbound lanes of Highway 1, about two kilometres east of Highway 34, shortly before 5 p.m. Thursday. The lanes were reopened after 10:30 p.m.

Video shot by a passing driver showed a heavily-damaged vehicle on the road. Its windows were smashed, its was roof caved in, and its front bumper was obliterated.

CBC News has reached out to Manitoba RCMP for more information but has not heard back.