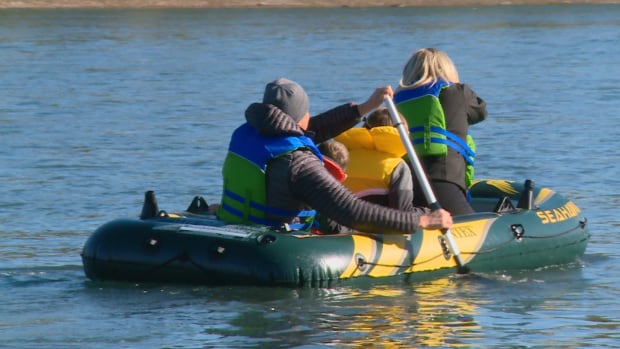 RCMP are reminding Manitobans to be safe while using inflatable rafts after several reports of people floating away on dinghies.

One dinghy drifted about 8 kilometres away from its launch point on massive Lake Manitoba, according to a police release.

On Sunday afternoon, Portage la Prairie RCMP said they responded to a report of eight people on a raft that drifted away from the shore of St. Ambroise Beach, located in a provincial park about 80 kilometres away from Winnipeg.

RCMP and Manitoba Conservation officers called for backup to assist in the rescue.

Two people were brought to shore by a civilian boat before RCMP and conservation crews launched their own and rescued the six remaining occupants.

It’s one of two instances that required rescue operations among several reports involving rogue inflatable floatation devices that moseyed “very far away” from the shoreline.

That prompted the police to issue a friendly reminder to Manitobans on social media about how to safely enjoy the summer weather on open waters.

In the last 2 weeks, <a href=”https://twitter.com/hashtag/rcmpmb?src=hash&amp;ref_src=twsrc%5Etfw”>#rcmpmb</a> received several reports involving inflatables floating very far from shore. In 2 instances, a rescue was required. When using an inflatable – ensure you are anchored, wear a life jacket, never be alone &amp; remember that the weather can quickly change.

“When you’re using an inflatable, remember to ensure that you are anchored, wear a life jacket, never be in the water alone, be aware of your own abilities, and always remain vigilant as the weather can change quickly,” Cpl. Julie Courchaine of the Manitoba RCMP said in the release.