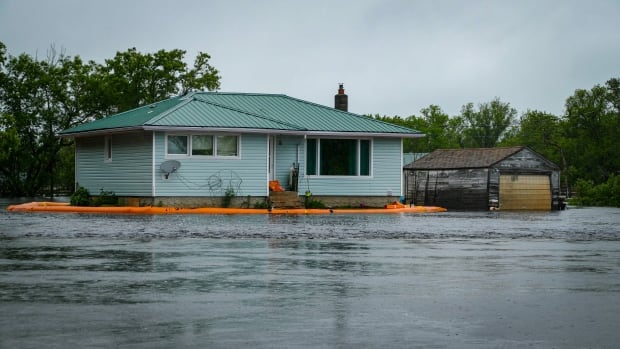 Another 77 homes in southeastern Manitoba are under a precautionary evacuation order due to overland flooding and the swollen Rat River.

The Rural Municipality of Stuartburn has issued evacuation notices to 70 homes in the Arbakka area, southeast of Vita. Overland flooding has taken out most of the road access to those homes, Lucie Maynard, the chief administrative officer for the municipality, said Wednesday.

Stuartburn is trying to keep one road open to allow residents to get in and out of the area, which sits between Provincial Road 201 and the Minnesota border.

Another seven homes in the Zhoda area are receiving new evacuation orders because the Rat River is backing up, Maynard said.

Four homes in that area were evacuated earlier this week.

Flooding in the town of Vita has also led to the deployment of an aqua dam around Shady Oaks Lodge, a seniors’ residence.

The flooding follows four days of heavy rain that dropped 90 to 150 millimetres of rain on southeastern Manitoba.

Maynard said grain farms across Stuartburn are flooded, as are cattle ranches and hog barns. No livestock has been moved yet to her knowledge, she said.

The Manitoba Emergency Measures Organization and provincial emergency social services are providing Stuartburn with evacuation advice, a spokesperson for the province said in a statement.

Manitoba Infrastructure is assessing damage to roads, the spokesperson said.