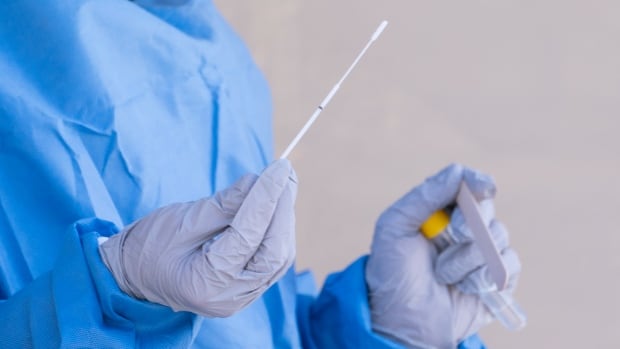 This brings the total number of confirmed cases in Manitoba to 400.

The current five-day test positivity rate — a rolling average of the percentage of completed tests that came back as positive — is now 0.45 per cent.

Three people are in hospital, with two people in the intensive care unit.

Chief public health officer Brent Roussin warned there is a potential risk of exposure due to a person who visited the Sherwood Grocery Store in Gull Lake, Man., while symptomatic on July 19, 20 and 21.

There are currently 74 active cases of the disease caused by the new coronavirus in Manitoba, with 319 people recovered and seven deaths. Many of the new cases are related to travel or close contact with known cases, including a number of cases linked to funerals, said Roussin.

“We know that this is where the virus can thrive, in events like this,” he said. “The nature of such events make physical distancing quite difficult and if we’re not cautious, this is where we see this virus spread.”

Health Minister Cameron Friesen said there had been plans to take the drive-thru testing site at the Main Street Manitoba Public Insurance Building offline, but he directed health officials to keep it open.

The fourth phase of the provincial government’s plan to reopen Manitoba’s economy came into effect on Saturday. Movie theatres, stage performances and casinos are all allowed to resume services, with restrictions.

Changes to visits at long-term and personal care homes also moved forward as of Saturday. Residents can identify two support people who will be allowed to visit residents in their own rooms.

Two new testing sites opened up in recent days, including one at the ACCESS Fort Garry site at 135 Plaza Drive, which opened on July 24, and one at 604 St. Mary’s Rd., which opened Monday.

Later this week, Roussin and Education Minister Kelvin Goertzen are expected to provide an update on the province’s plans for the upcoming school year, said Friesen. The provincial government has said it would decide between three different potential plans by Aug. 1.