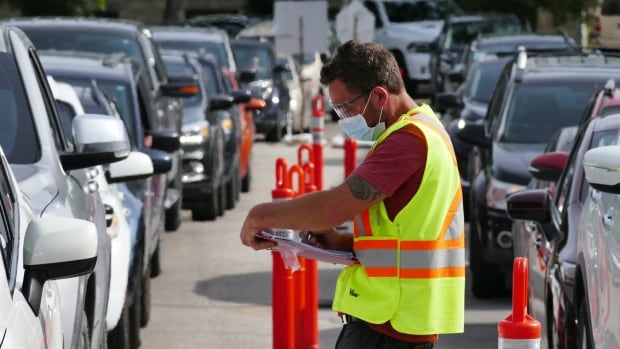 Thirty-six new cases of COVID-19 were announced in Manitoba on Sunday.

The update brings the total number of active cases in the province to 205, the province said in a news bulletin, representing a drop from the active caseload of 211 announced Saturday as more people recover from the illness.

Meanwhile, two cases of the illness previously identified in Manitoba have been removed. One was confirmed to be an out-of-province case, while another was deemed to not be a case of COVID-19, the bulletin said.

The update brings the total number of cases detected in Manitoba to 697, 483 of which are listed as recovered.

Twenty-one of the new cases are in the Southern Health region, including a girl and a boy between 10 and 19 and a woman and a man in their 20s.

Nine more of the new cases are in the Prairie Mountain Health region, including four children under the age of 10 — two girls and two boys. Those cases also include five men: two in their 30s, one in his 40s and two in their 50s.

Another five of the cases announced Sunday are in the Winnipeg health region. Those cases are a boy between 10 and 19, two men in their 20s and a woman and man in their 30s.

The final case is a man in his 50s from the Interlake-Eastern Health region.

Most of the cases in the Southern region are linked to a known cluster in that region. Public health officials are still investigating the new cases, and will only release more details if there is a risk to public health, the bulletin said.

On Saturday, the province announced its ninth death linked to the illness caused by the new coronavirus. That patient, a man in his 80s from the City of Portage la Prairie health district, was in intensive care before his death.

He was considered a previously recorded COVID-19 case and was linked to a known cluster, the province said in a news bulletin on Saturday.

Manitoba’s five-day test positivity rate, a rolling average of the COVID-19 tests that come back positive, is now 1.47 per cent, down slightly from 1.48 per cent on Saturday, the bulletin said.

Nine people in Manitoba are now in hospital with the illness, including three in intensive care.

Twenty more cases of COVID-19 were also announced on Saturday in Manitoba. With Sunday’s update, there were 56 cases of the illness announced in the province over the weekend.

On Saturday, 1,669 more COVID-19 tests were done in the province, the bulletin said, bringing the total number completed in Manitoba to 113,952.

The province is still only recommending people with symptoms be tested for COVID-19. Employers should not send their workers for testing unless they have symptoms or the testing has been recommended by public health, the bulletin said.

People who do have symptoms should get tested as soon as possible once they get sick.

A COVID-19 cluster in Brandon, Man., which is in the Prairie Mountain region, had at least 64 known cases linked to it as of this week. As of Saturday, there were also 43 cases linked to the city’s Maple Leaf Foods pork processing plant, a spokesperson for the company said.